How did AIMIR Turn a Single Sketch into a 3D Rendering? Case Study of Royal Manor Residential Project 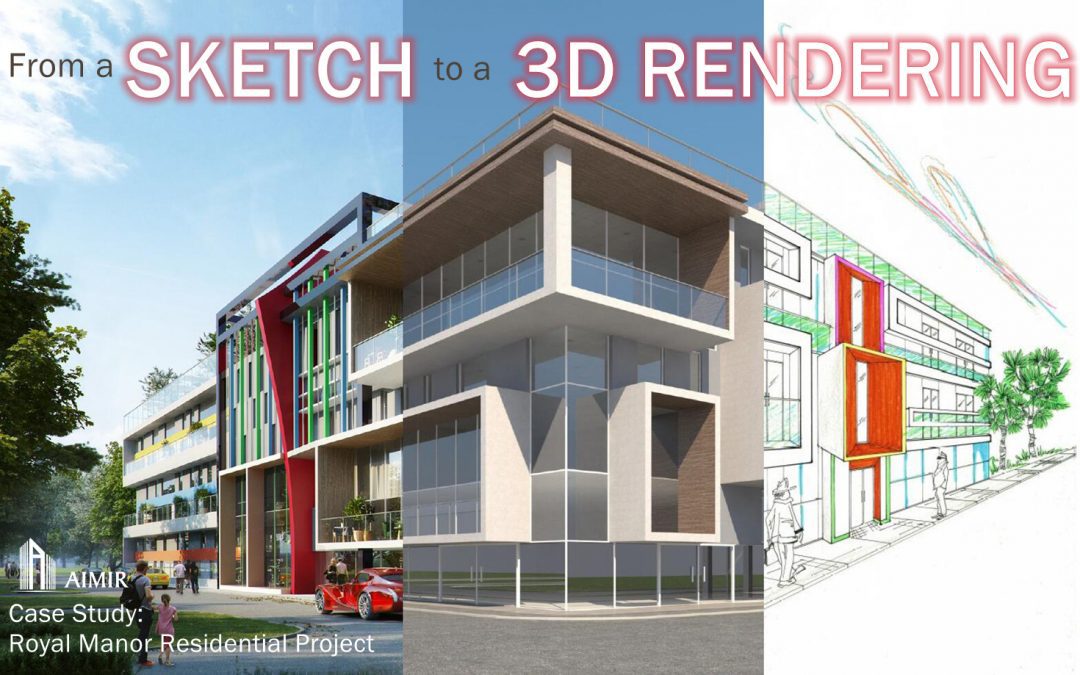 What do you think about the following sketch? Nice one, isn’t it? Apparently, AIMIR’s 3D artists didn’t think the same way when we saw it. Because this is the ONLY thing we’ve received for a rendering project. Yes, there is no model, no confirmed design, nothing but this. 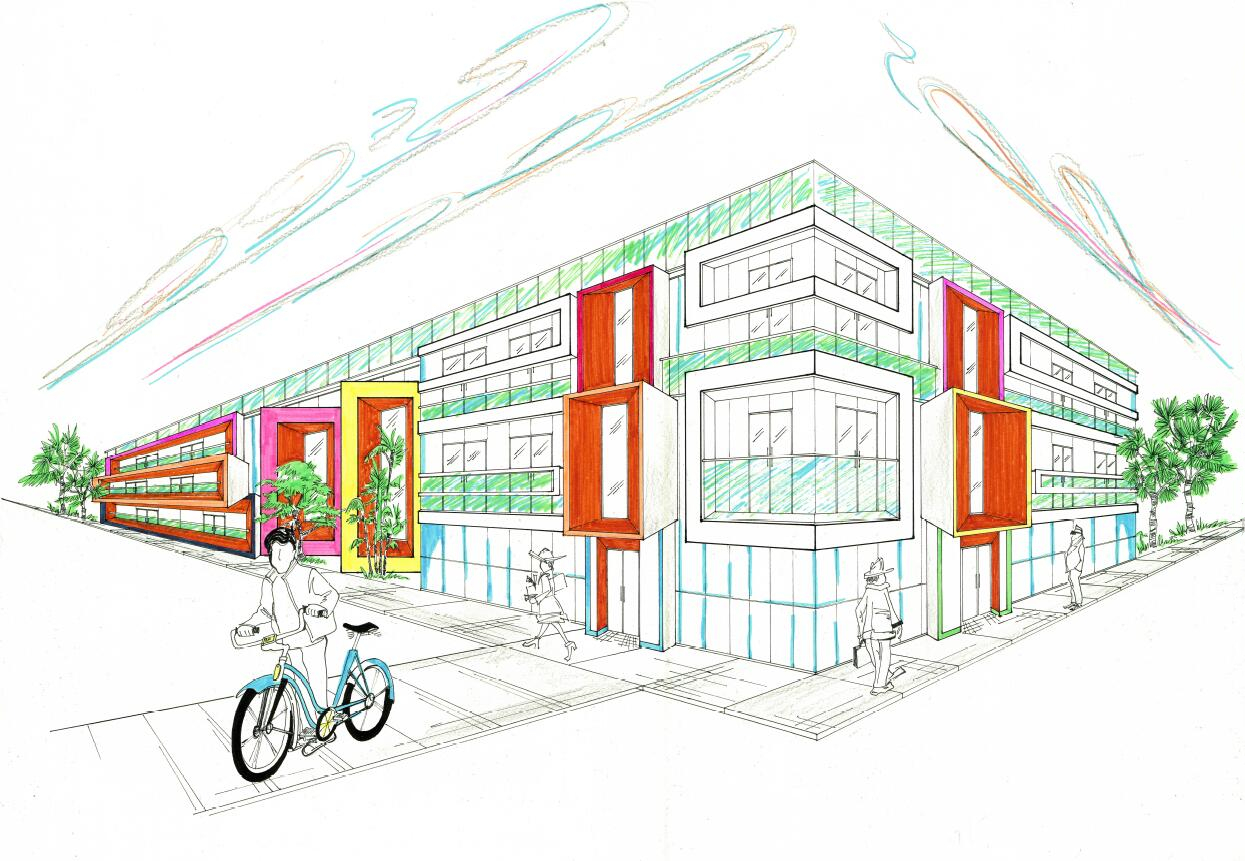 Start from a Sketch

Anthony, reached out to inquire if we were able to handle the Royal Manor Residential project, a 3-story apartment building including 25 units in Canada. He mentioned the design was not finished yet. All he could provide was a conceptual sketch. Actually it is not correct to say the sketch was the only thing we got. Anthony sent us the sketch as well as four reference images. He pointed out the points he wanted to consolidate together for the rendering:

C1: the balcony and colors;

C4: the one he really likes, such as the mood and accent.

Actually, this was not the first time AIMIR received project requests like this. Started our ArchViz profession in 2006, AIMIR has gained tons of experience handling all types of projects under various conditions. By the way, we’d like to share with you one of our regular clients from USA who occasionally provides beautiful sketches and AIMIR helps to make magic happen. Click here.

Since Anthony cannot provide any other materials and the design was not complete, we decided to build the model for the design first, and incorporate these features from each references for a rough draft.

Anthony told us the sketch is just a concept design, so we kindly asked him to mark and design on one of the reference images he sent. In this way, we were able to catch more of his idea and build the model more closely as he imagined. 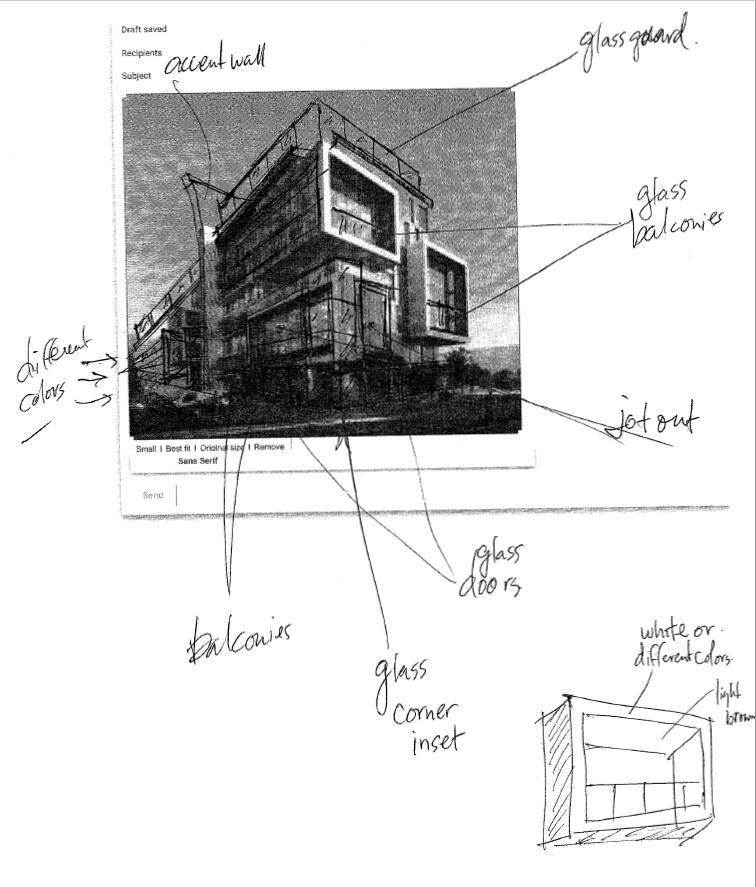 Anthony marked on this reference image per our request. This image became the key to our understanding of his design.

After receiving the marked image, Anthony’s design became clearer. We started to build the model according to the information we had at the moment, and it looks as below image: 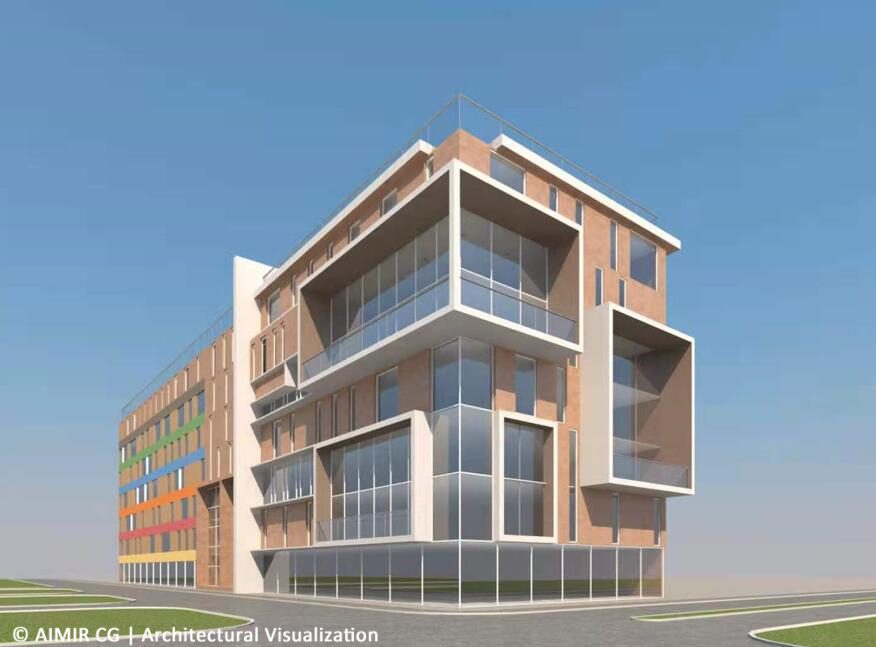 Anthony responded with his markups for the design quickly: 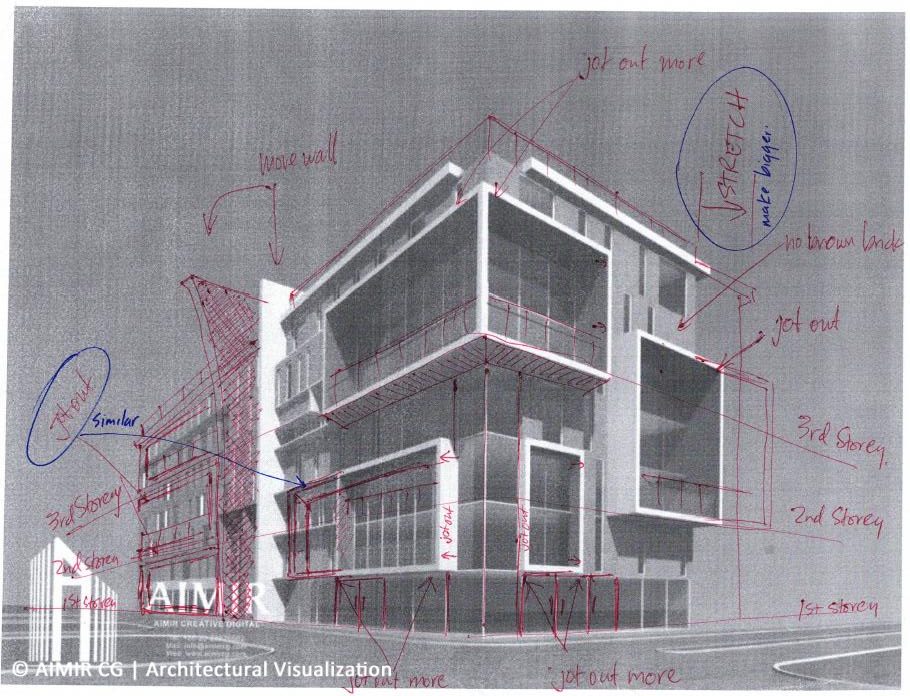 After a couple of rounds, the final model was confirmed by Anthony as below: 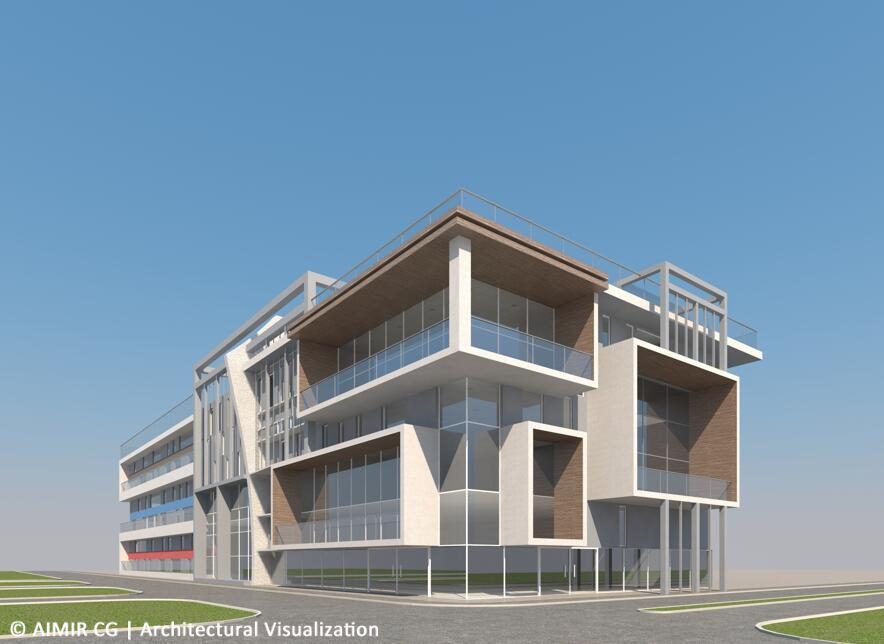 In the production process of a 3D rendering, the modelling phase usually doesn’t take this long. For this project, Anthony the architect hadn’t finish the design when we started the project. So Anthony and AIMIR redesigned the building together. It apparently took a relatively longer time for both sides, and required extremely high professionalism for AIMIR’s 3D artists to give advice and design the building together with our client.

It was also a challengeable job to render the model, because the original “design” didn’t include any materials. We talked with Anthony and finally decided to use glass, aluminum cladding, and brick as the main material for this building. Thus, AIMIR’s 3D artists created the first round of draft with our own understanding and design. 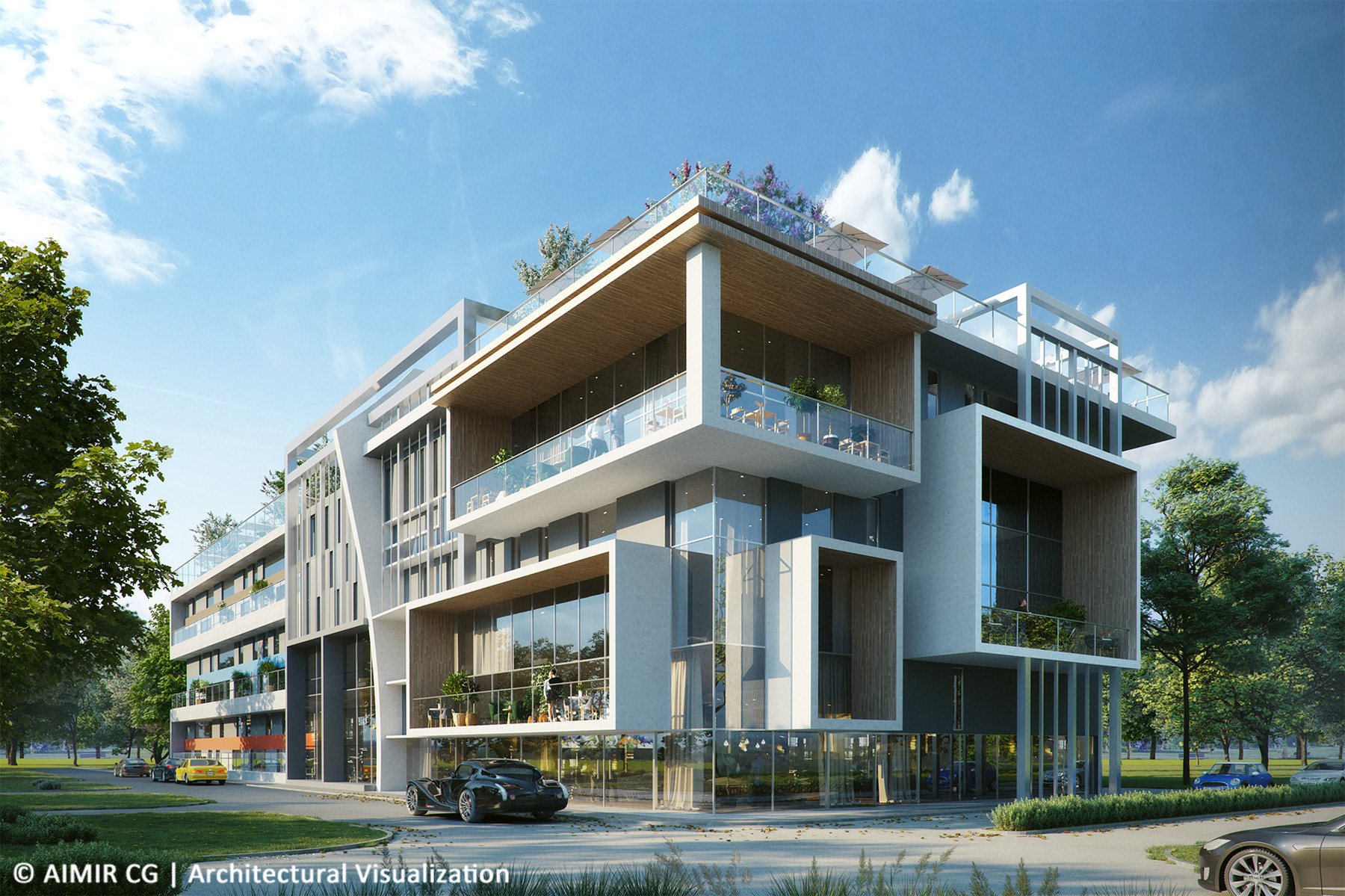 AIMIR’s design of the materials and textures.

After seeing this draft, Anthony was very happy with the effect of AIMIR’s texture selections. But it seemed he prefers something more colorful. So he replied with some color-changing mark-ups of his own idea. 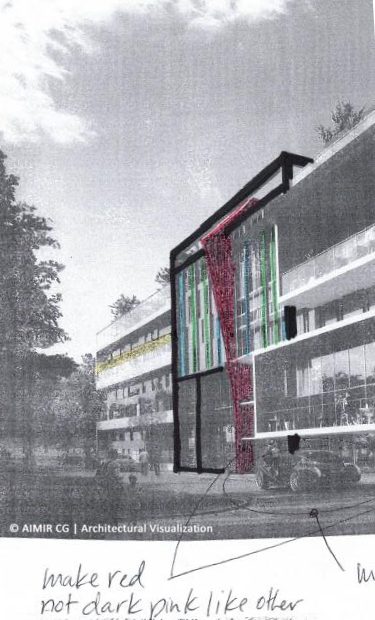 As he wished, we revised the colors. The final 3D rendering, which Anthony was thrilled to see, is as below: 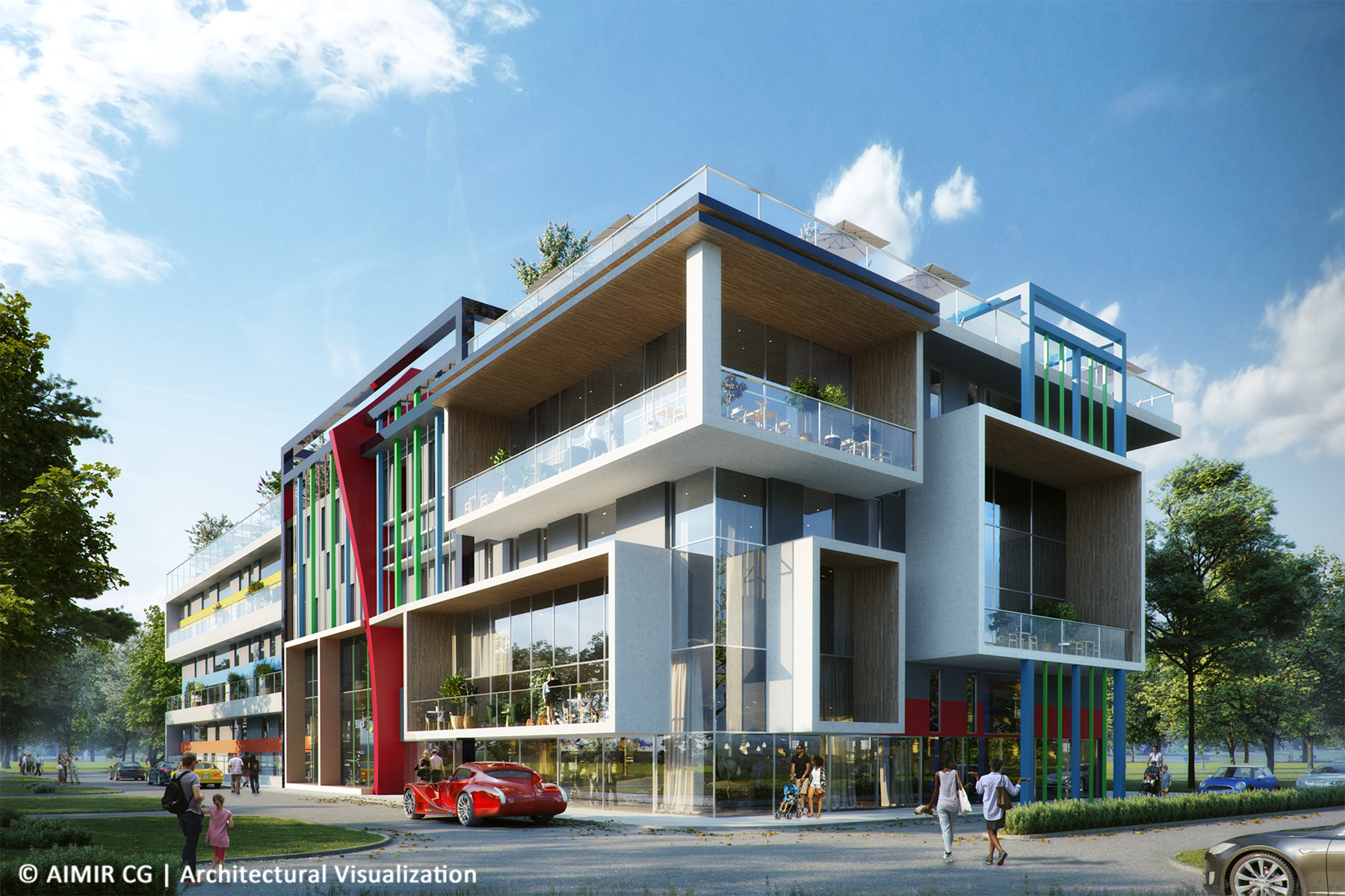 Anthony is a freelancer architect, and this was the first cooperation between Anthony and AIMIR. It started with such a challengeable task. With comfortable communicating pace, it ended with a result that both sides are satisfied with. He said he would talk to us with another project soon.

The process of creating a 3D rendering is not the same for each project. It largely depends on the completeness of original design, communication efficiency, professionalism of the ArchViz studio, and various other factors that could happen during the production.

In a word, it does not always relies on one side to make perfect renderings. It’s about timing, communication, and professionalism of both sides to create a stunning visualization work. AIMIR is proud to work with full capacity and the highest professionalism in the ArchViz industry, and is ready to face challenges. If you have any interesting project, please feel free to talk to us!