Beyond the Shell Enables Londoners to Join the Construction of Homes 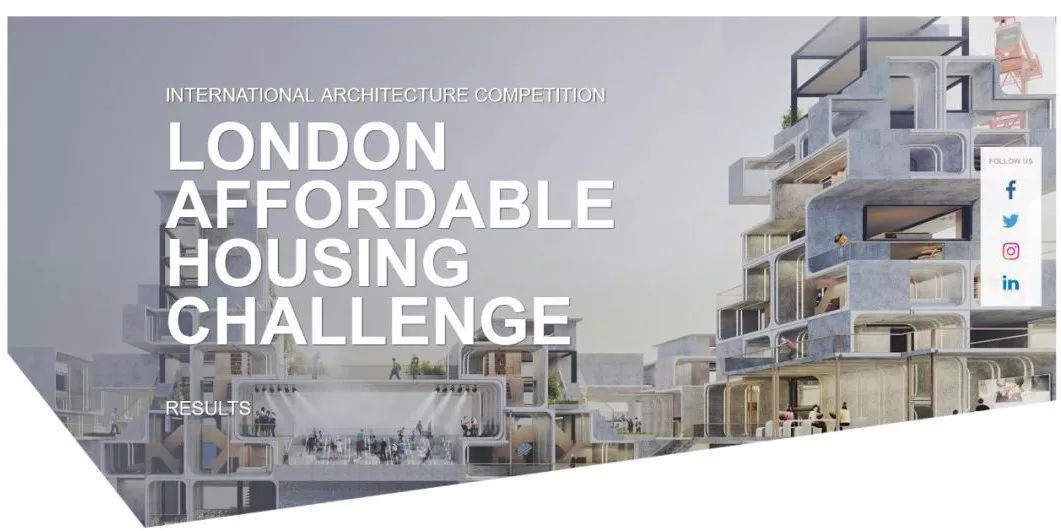 Organized by Bee Breeders, London Affordable Housing Challenge, an open international competition, sought creative solutions for affordable housing in London. Lianjie Wu, the Chinese architect, with her entry Beyond the Shell, stood out from 43 shortlisted candidates and became the 1st prize winner!

L.J. Wu graduated from Bartlett School of Architectural, UCL. Previously she has specialized in public cultural buildings, hotels, and residential developments in Beijing and Shanghai. Now she lives in London. Born in China, educated in London, and with working experiences in different places, she has a diverse background, which makes her design more integrated and grounded.

In this post, let’s enjoy her project and AIMIR will show you why it is favorably reviewed. 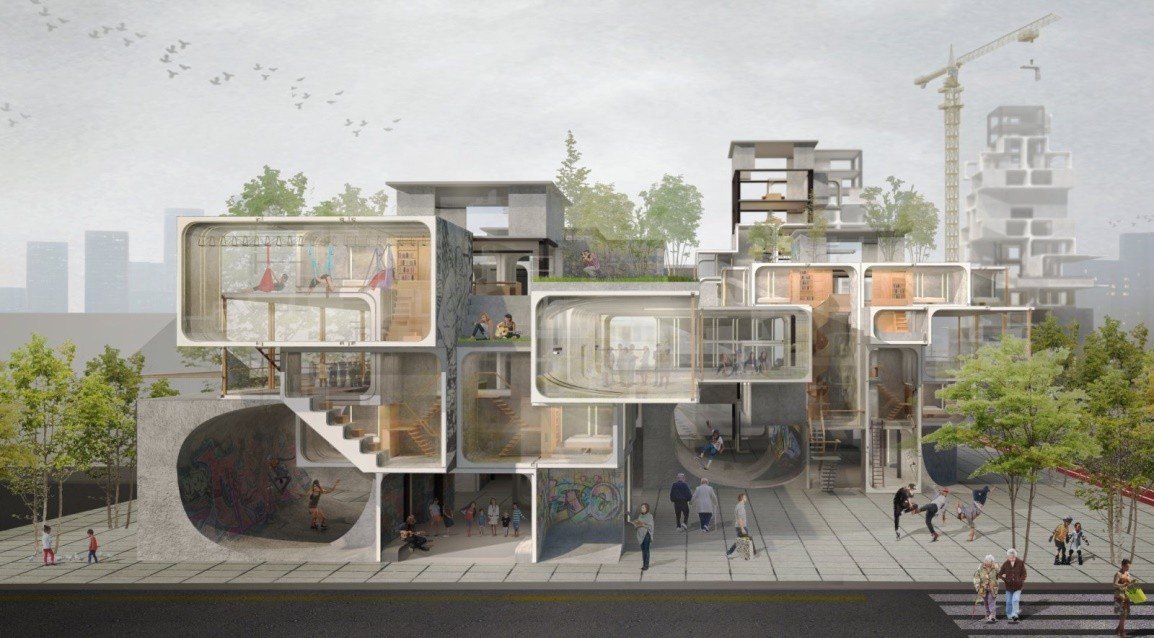 3D printing has made rapid progress in the last few years. Its low cost, fast speed and free-form nature attract considerable investment of many startups and technology companies. In L.J. Wu’s proposal, she makes good use of the benefits of 3D printing to design mass affordable housing complexes that are suitable for independent and free construction. 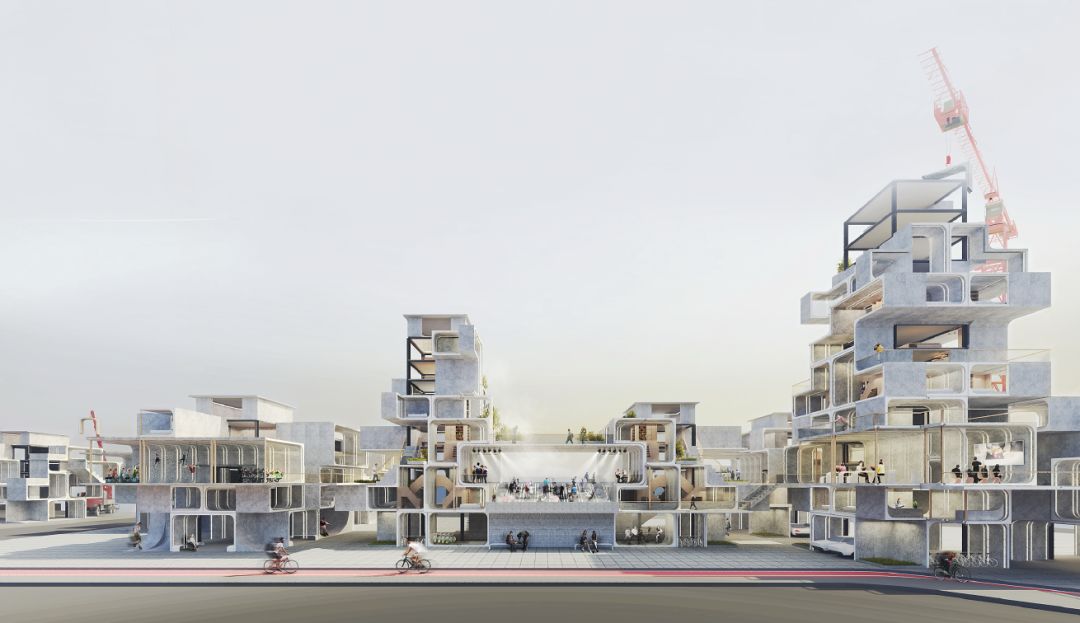 How to achieve affordable housing?

The design redefines the use of prefabricated components, which enables residents to join the construction of their homes. The building space is assembled from removable concrete components, making it convenient for residents to assemble flexibly according to their needs, which reduces the cost of construction. 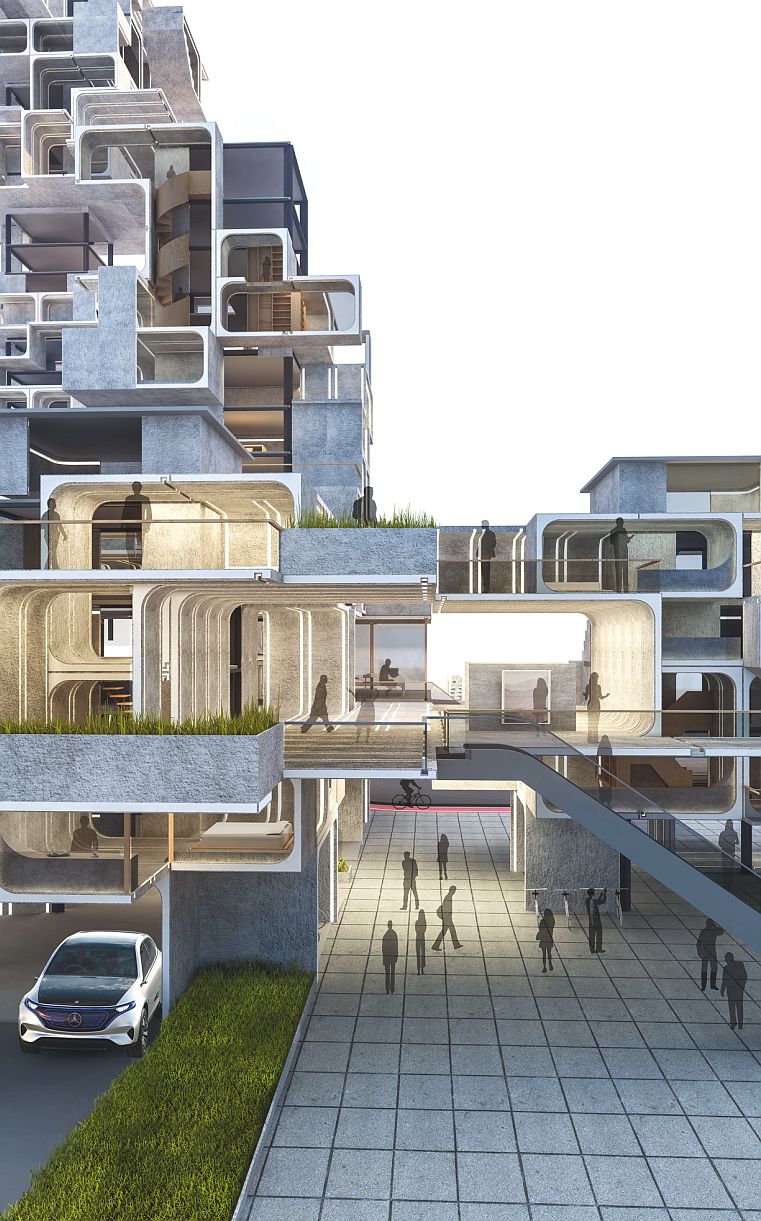 How do Londoners construct their houses?

First, the project has a custom component library, which is one of the most interesting highlights in my eyes. Look at the house components in these illustrations. Don’t they look like the building blocks we played in childhood? 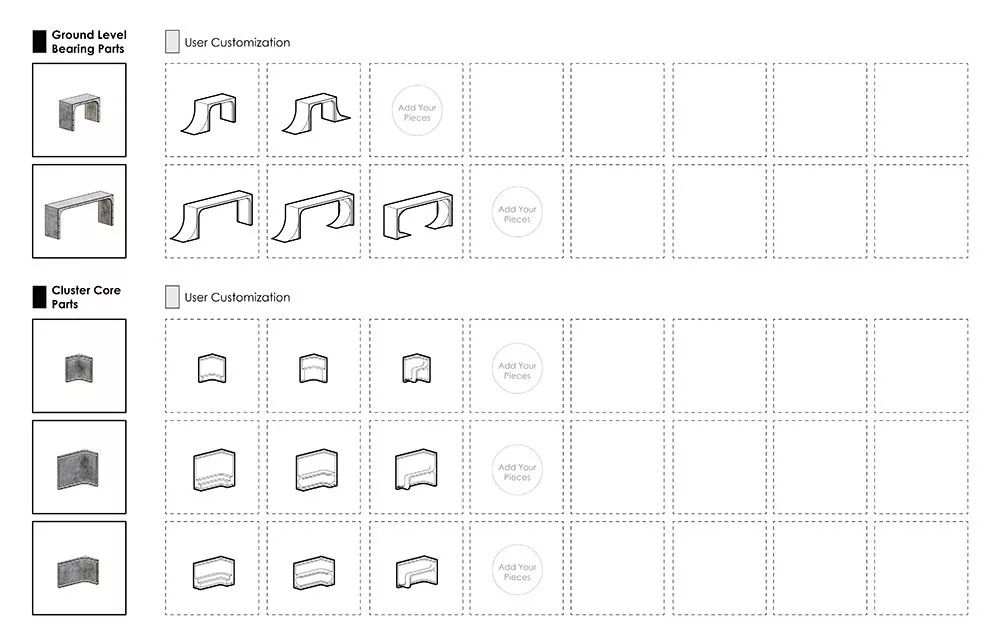 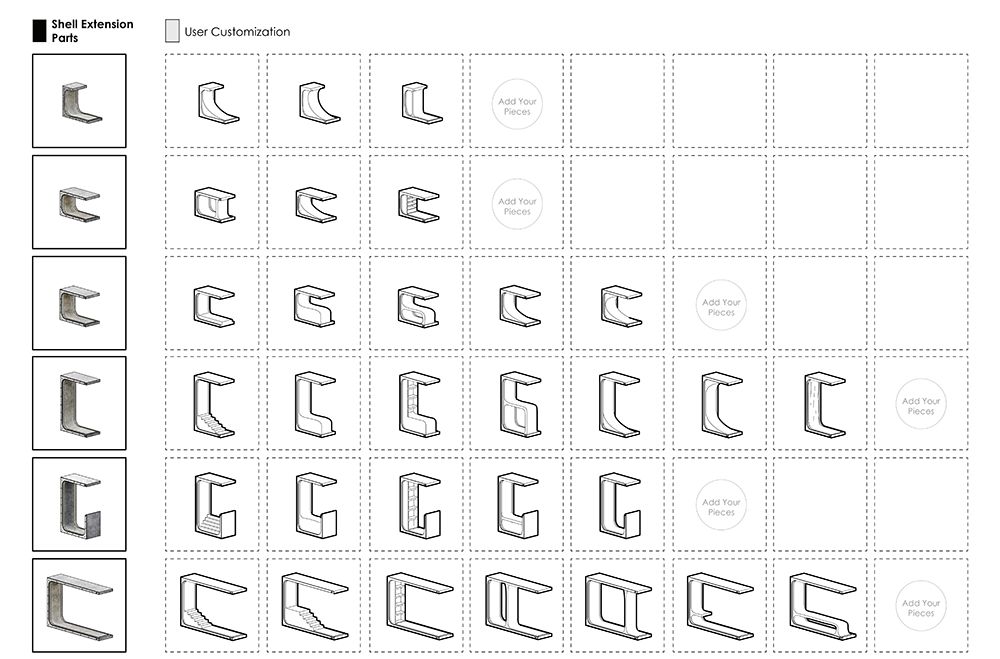 In addition to several fixed structural components such as corridors, stairs and pedestals, there is also a choice of expansion components. Each residential cluster contains two U-shaped components that form an open public space. Besides, it can be compatible with other dwellings, developing a building cluster of 8 household units which could continue growing as the smallest unit. 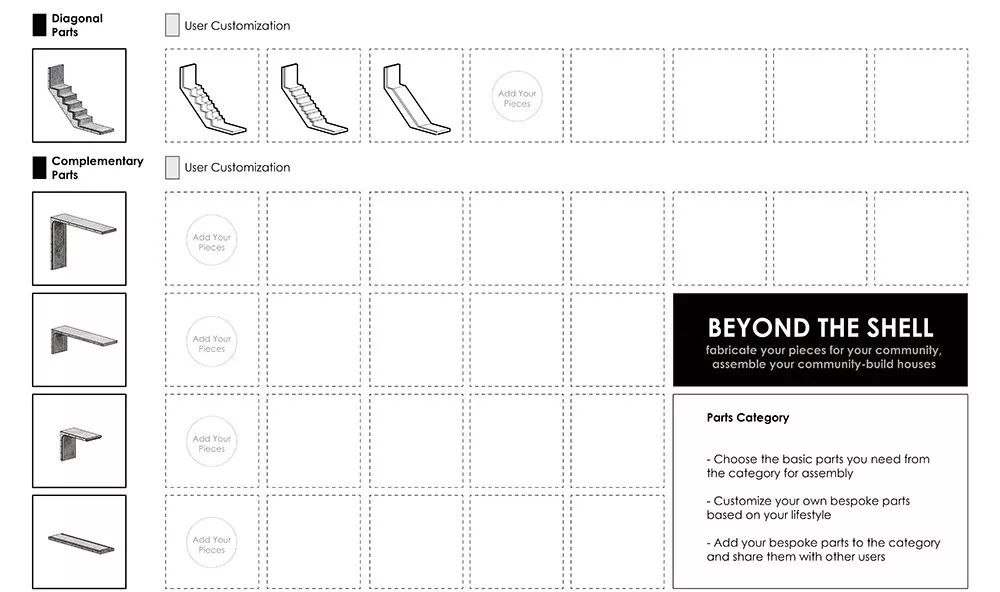 Second, residents can refer to the community assembly manual. Ordinary people who have no architecture knowledge or construction experience can also understand the assembly process and required tools. 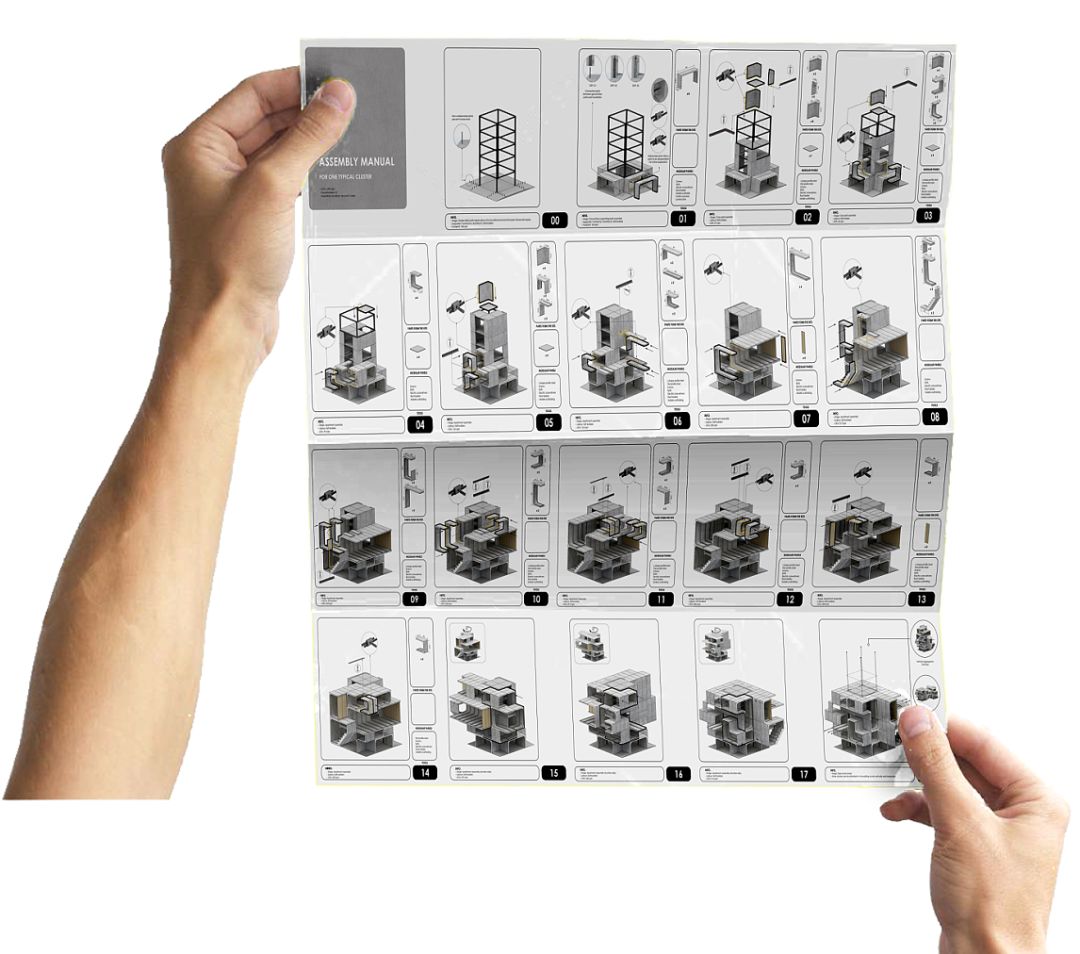 Finally, in the digital age, these prefabricated components and custom processes used to build houses can be uploaded to an open-source platform for modification and update.

The original component defines the logic of the assembly and specific application scenarios of the component. Furthermore, based on sharing digital thinking of the open platform, the user can keep developing the database of the component and enriching the applicability of the component library.

The architect describes this process as clicking, customizing preferences, applying settings, previewing the community, and finally building a community suitable for you. All parts and layouts are open to residents. Each person can customize the details of the home based on their needs and preferences, including your neighbor’s interests and careers. Then choose the floor you want. At this time, other residents will participate in the common community construction according to your choice and finally become your neighbors. As dwellers increases, the community can grow and expand, because the building components reserve an open interface. A well-organized assembly process can allow the home to develop into a multi-scale space. 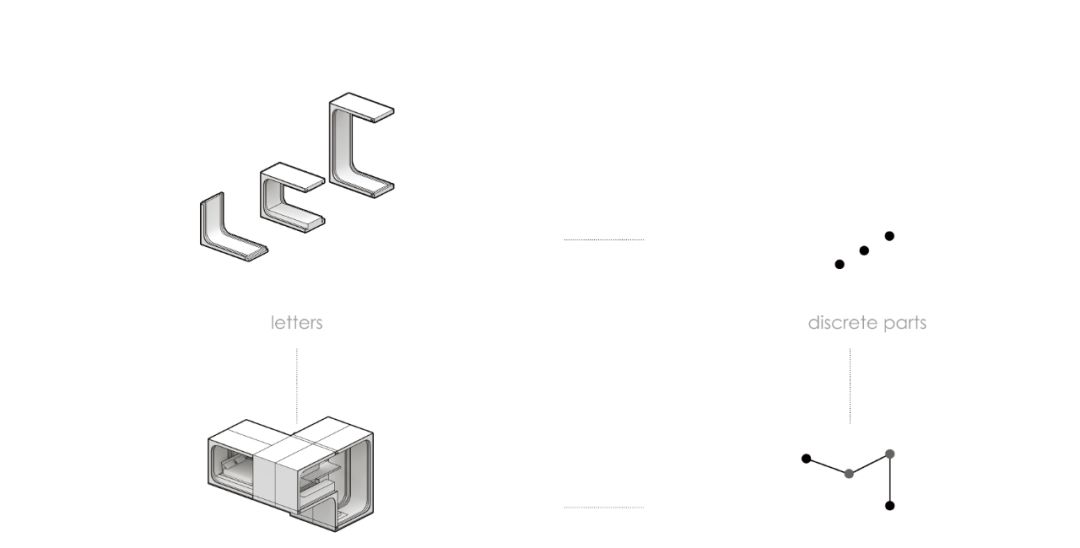 In this neighborhood, there is no need for worrying about personal privacy. Visits between neighbors are also very convenient alike. 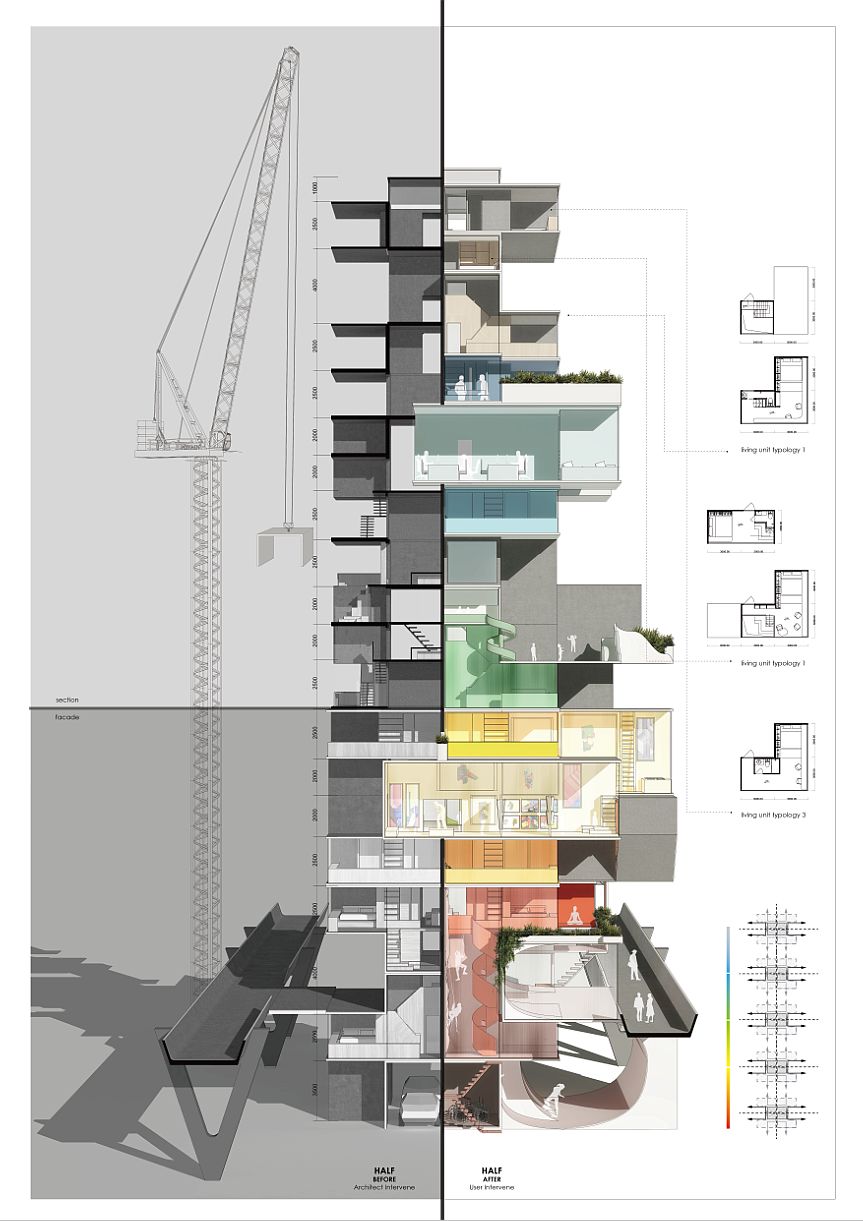 Comparison between “BEFORE” and “AFTER”

What is the concept of the design?

Why did the architect design affordable housing like this? It can be explained from her understanding of London.

Beyond the Shell mainly focuses on the self-built houses in the city. When conducting a survey in Hackney Wick, she found local artists often lived in grouped houses rebuilt by abandoned warehouses but rented a public community center as a venue for exhibitions and seminars. She was impressed by this long-term, unreasonable style, so she set out to solve this problem and used this area as a project experimental base.

She said, “I envision another alternative of apartment construction: collective economy, which mixes residential areas with public spaces. The residents are both neighbors and interested parties. They can share the public space while enjoying independent private space. They can work, live, and create together.” 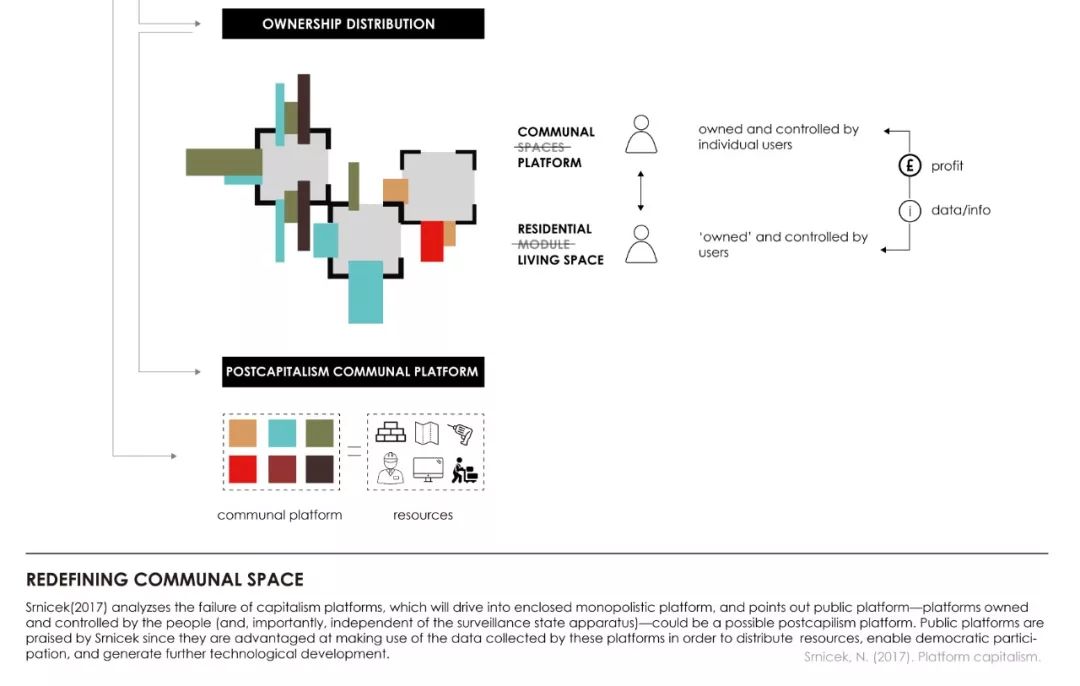 By this way, the use of public space is maximized without the waste of construction such as large-scale corridors, elevators in ordinary apartment buildings. People can even make this a commercial space.

Meanwhile, this solution also shows the community value of emerging lifestyles such as co-working and live-work. Its U-shaped components blur the boundaries between individual homes and public areas, pushing people to walk out of the room and activating the entire community. 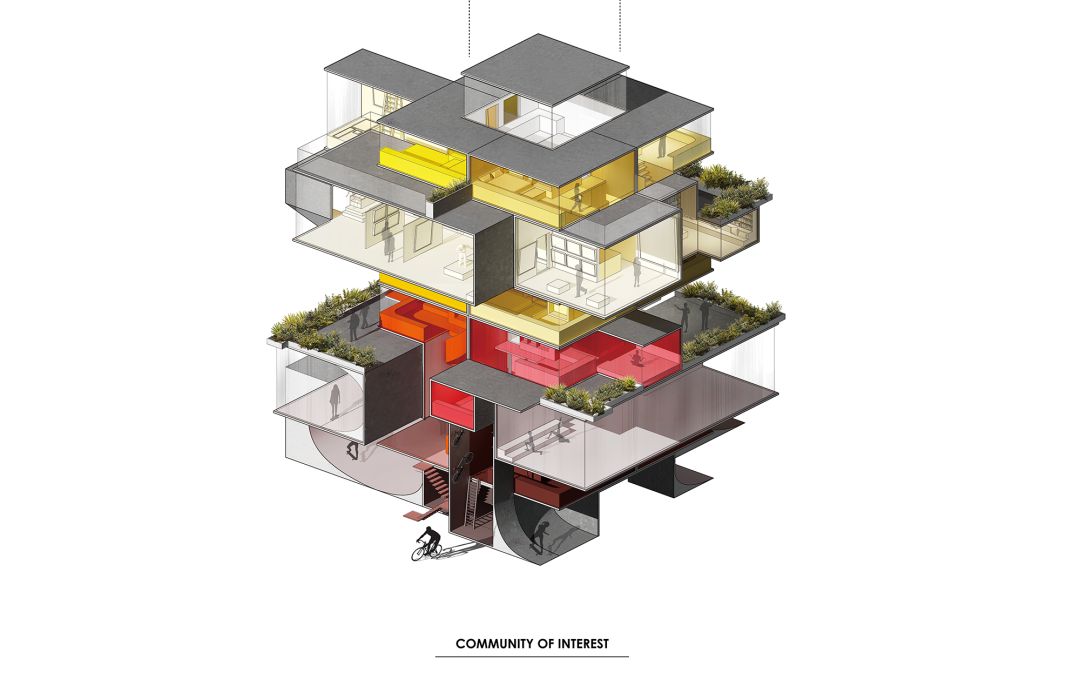 Beyond the Shell was not the first to put forward a self-built housing concept. Before it, Naked House by London office OMMX and ELEMENTAL’s Chile project Half the House, had a design concept of bare shell and small living space. However, the designer has deepened this concept according to local conditions and by using cutting-edge technology. The encouragement for house users to actively participate in the construction is a new exploration of the urban self-built house system.