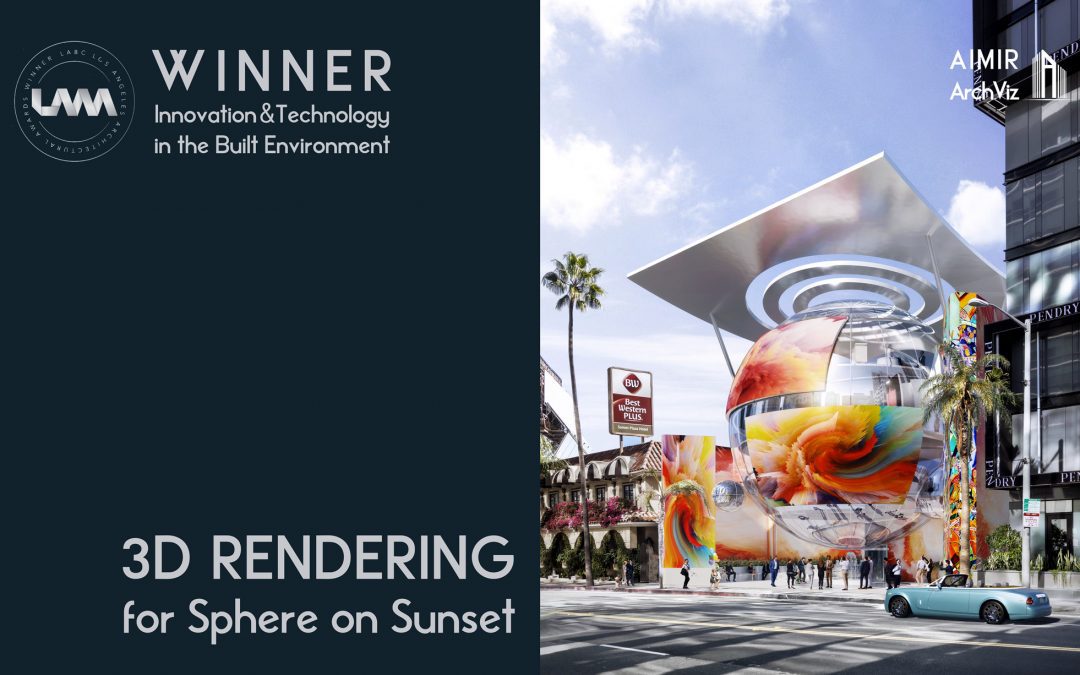 On 26th October, 2021, at Beverly Hilton Hotel, the designer Saee Studio has been announced as the Innovation & Technology in the Built Environment winner of LABC’s 51st Annual Architectural Awards, for the Sphere on Sunset Project.

*The Architectural Awards held by Los Angeles Business Council (LABC) is an annual celebration of projects that embrace innovative design standards to enhance the way people live in Los Angeles. 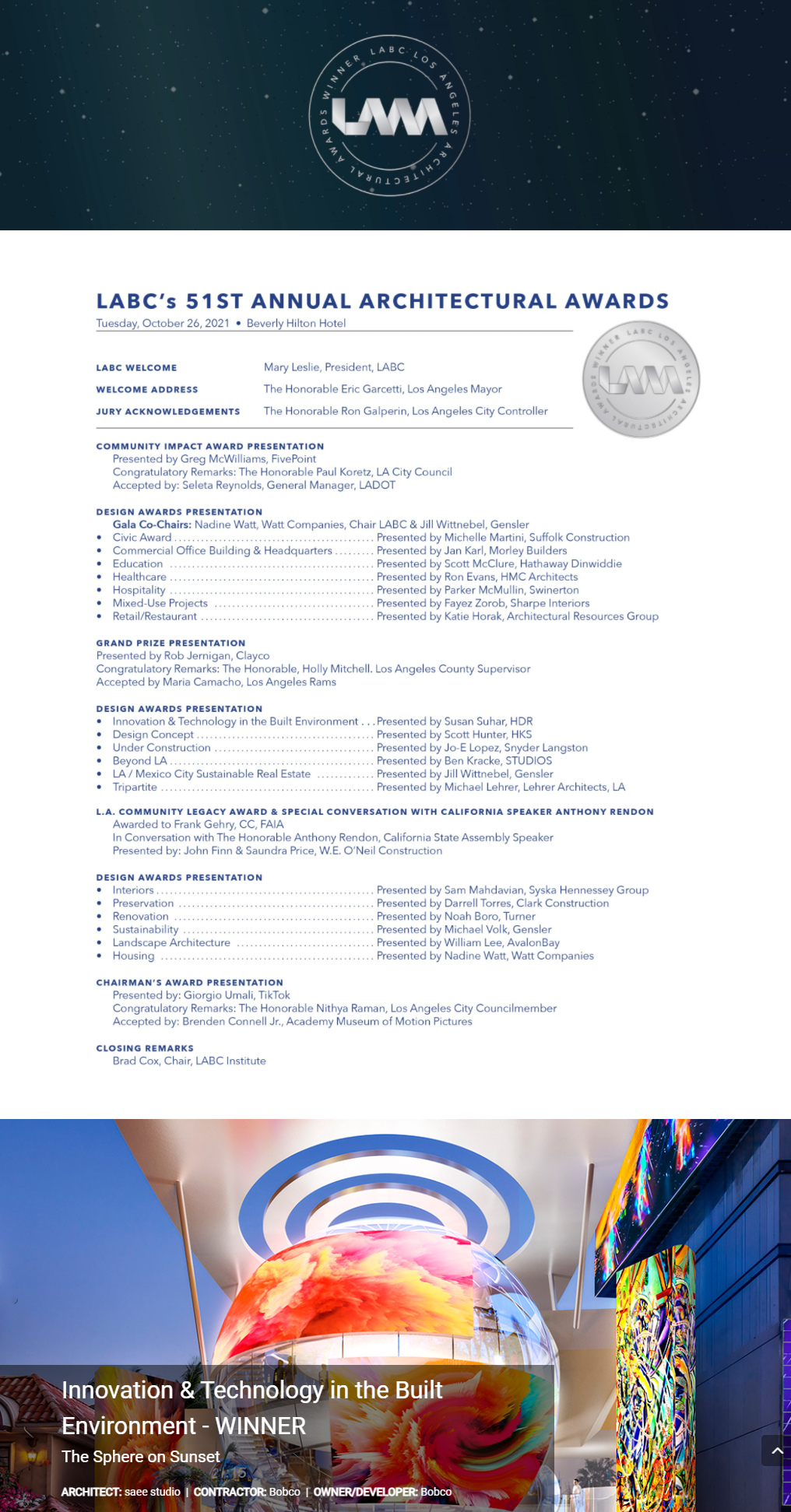 As the 3D visualizer partner, AIMIR is so proud to create all 3D renderings for the Sphere on Sunset Project which demonstrate this amazing project in all details. Please follow us to learn more about this award-winning project in Los Angeles.

“The most beautiful thing we can experience is the mysterious. It is the source of all true art and science.”

Michele, the designer of Sphere on Sunset, said the original concept of the design is from billboards. As visible media, billboards have changed how we interact and communicate, and altered societal behavioral and perceptual abilities.

He wanted to create a medium, which provides a platform for people to occupy and interact with. It will provide an energetic platform for public, private, and civic functions, creating a center for LA’s collective life. People, is the core of the design. 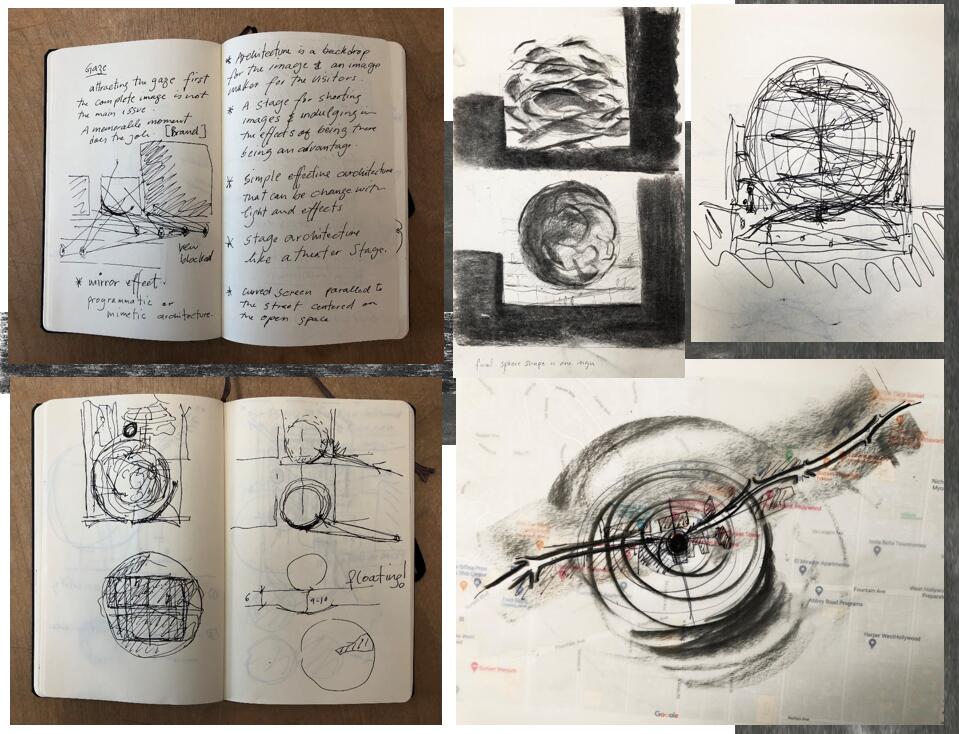 This dynamic site is surrounded by three multistory hotels that hinder its visibility from the east and create a substantial impact from the west. To respond to these restraints, Michele assumed a proactive position towards the architectural design – a floating sphere. 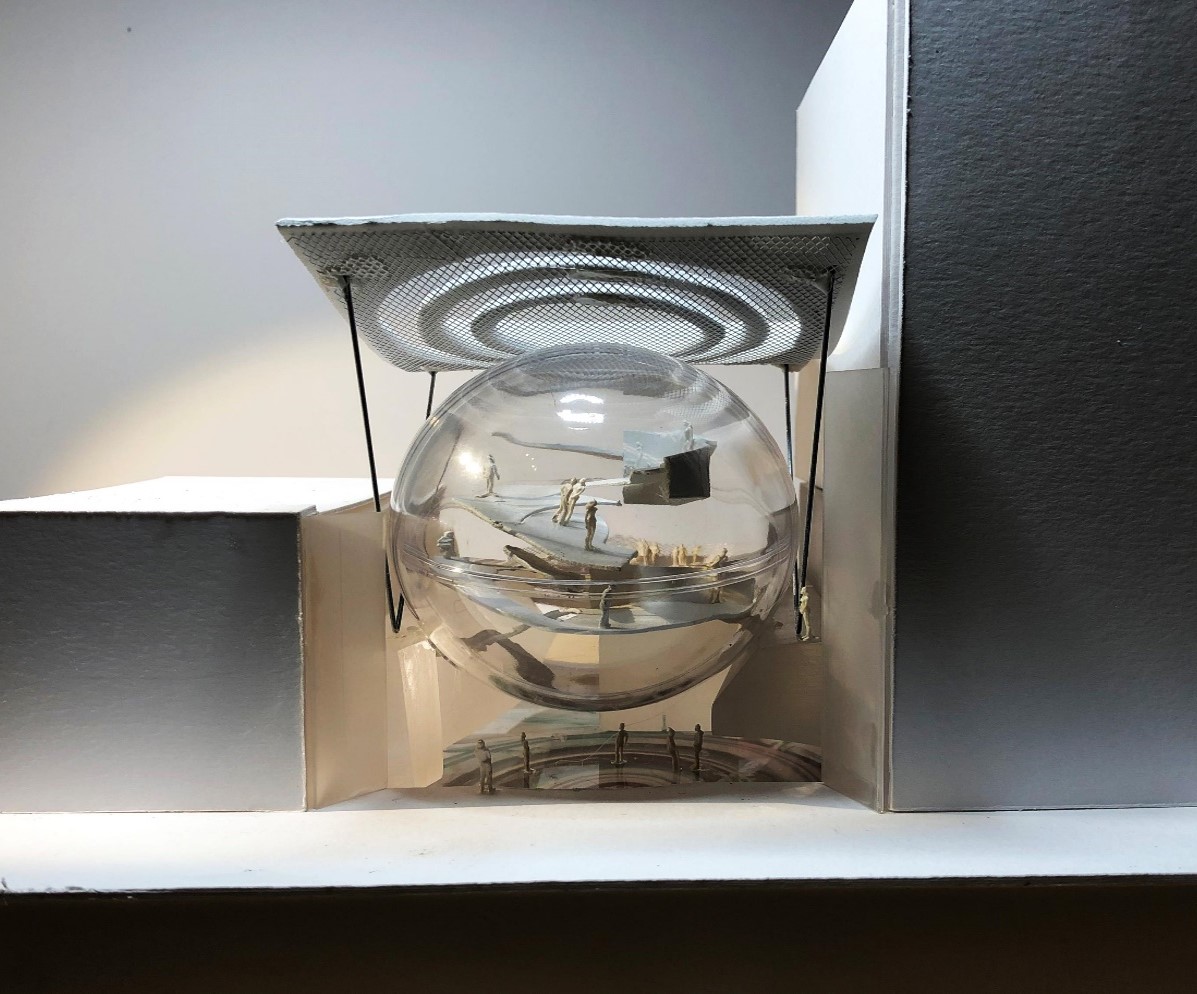 He also made a physical model to understand the unity and interconnectedness of the project.

Apparently, a physical model is not enough. 3D architectural visualization is the best choice to showcase the unbuilt ideas. After doing some research online, Michele decided to work with AIMIR.

At AIMIR, we were attracted by the design as soon as we saw it. During the kick-off meeting, we understood Michele pays great attention to the relationship between the sphere and the buildings around.

He took loads of site photos and shared with us. We carefully built the models for surrounding hotels, and sent him a draft.

We built the rough model (left) based on the site photo (right).

Despite it is just a rough draft, Michele expressed his worry more than once about whether the model would showcase the real site around. So, as an architectural visualization consultant, we recommended Michele to use photo-composition to demonstrate the surroundings 100% precisely and accurately.

For the best result, we directly recommended him to hire a professional photographer instead of taking photos by himself. This is because professional photos normally meet the critical needs once the requirements (camera angle, mood, what content to include, etc.) are given. He took the suggestion right away. Two days later, we’ve received these incredible, high-quality, carefully-composed site photos with the ideal camera angles and moods that AIMIR suggested. 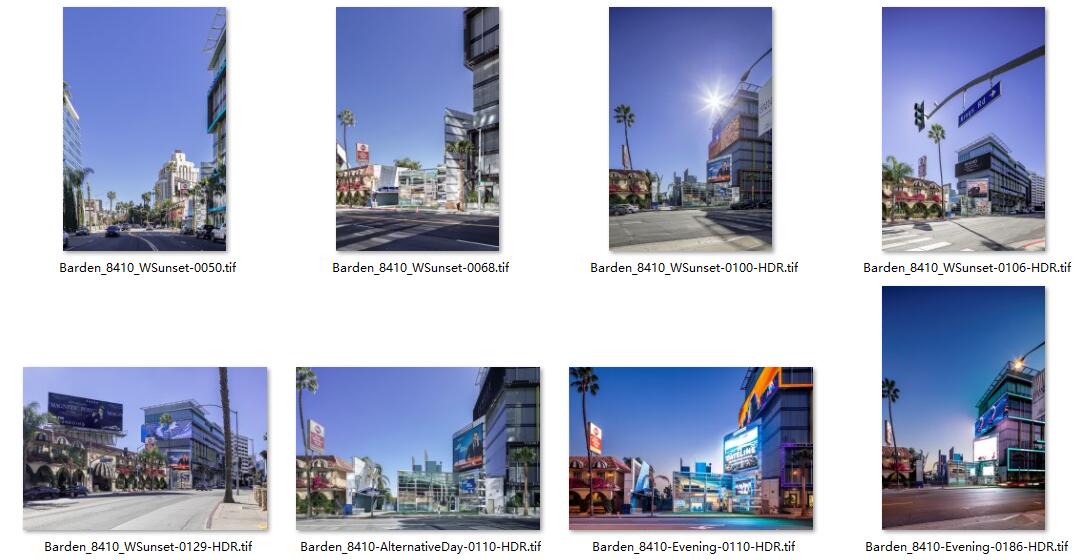 By the way, if you’re looking at using photo-composition for your 3D renderings, here is AIMIR’s absolute guide for photo taking and selection to save your time and money.

People: the True Element that Makes the Scene

The initial design is to create a space in LA that will spark visual interest and fuse public involvement. So, there won’t be one image without people and activities. People become the deciding factor to the mood of the 3D renderings.

Michele provided the general atmosphere he wanted for the project: to show LA’s diversity including but not limited to culture, race, age, and activities. And he hoped all people were attracted by this building and interact with various activities. 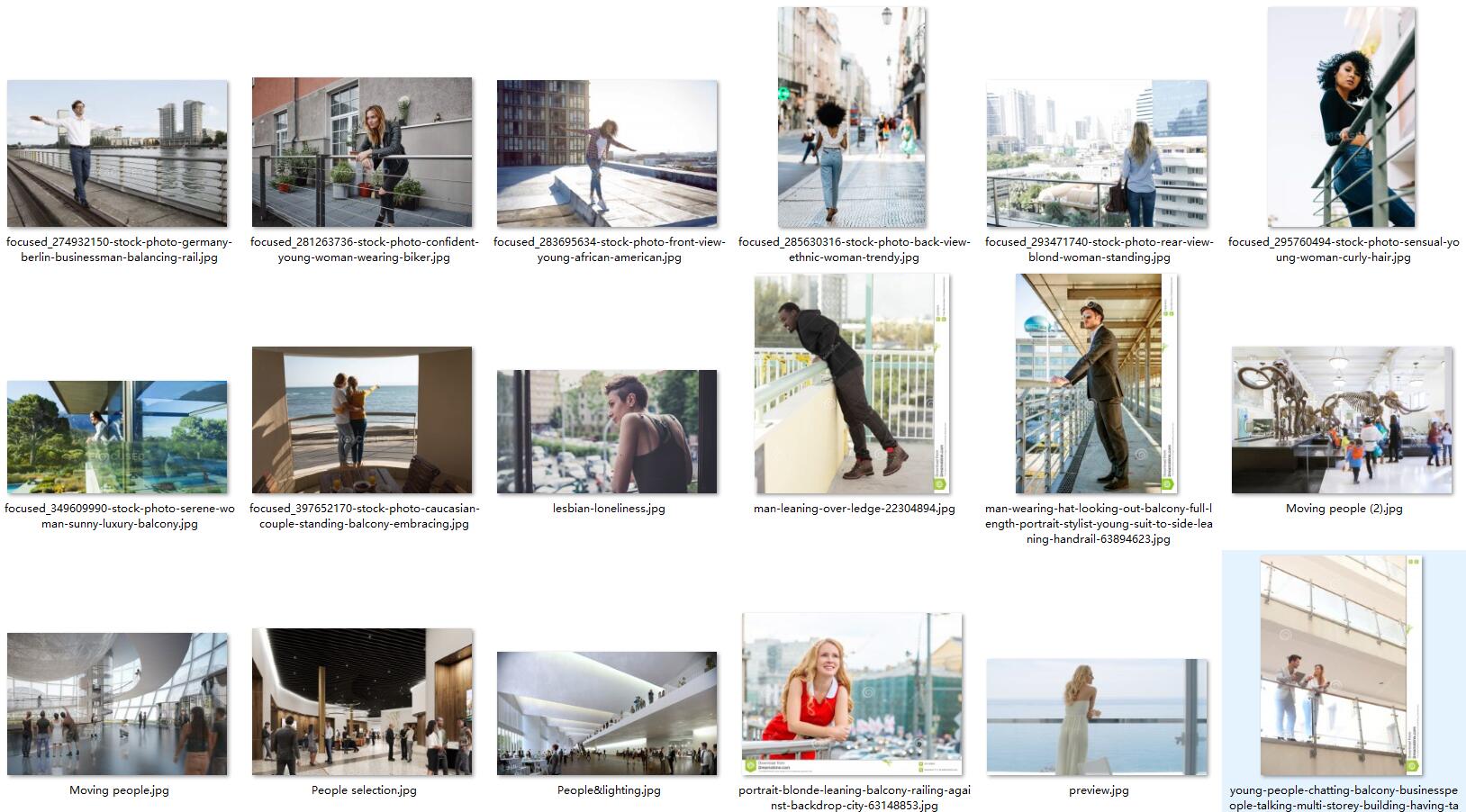 After a bit struggling, our 3D artists added people in all 3D renderings. The following is a sample of how to use people to tell your story. 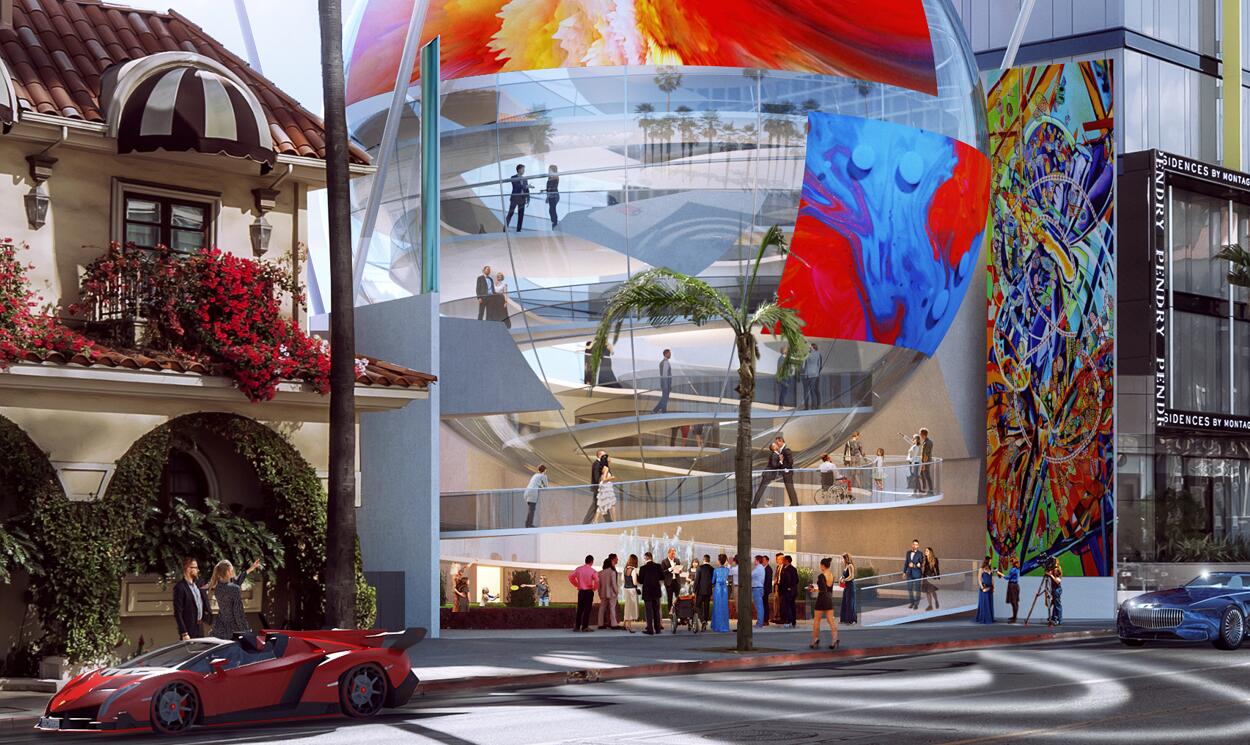 Visitors on the ramp inside the sphere; live TV program; a speech near the fountain.

A Public Space has the Potential for Advertisement

Michele designed two large LED signs on the front surface of the sphere. They will not only add a lot of visual flamboyance to this site, but also able to carry advertising. He asked whether we could make an advertising version of each image by changing the pictures on signs. Our 3D artists were happy to provide this service for free. It is one of the advantages of 3D rendering: change the design anytime in the image rather than on site. 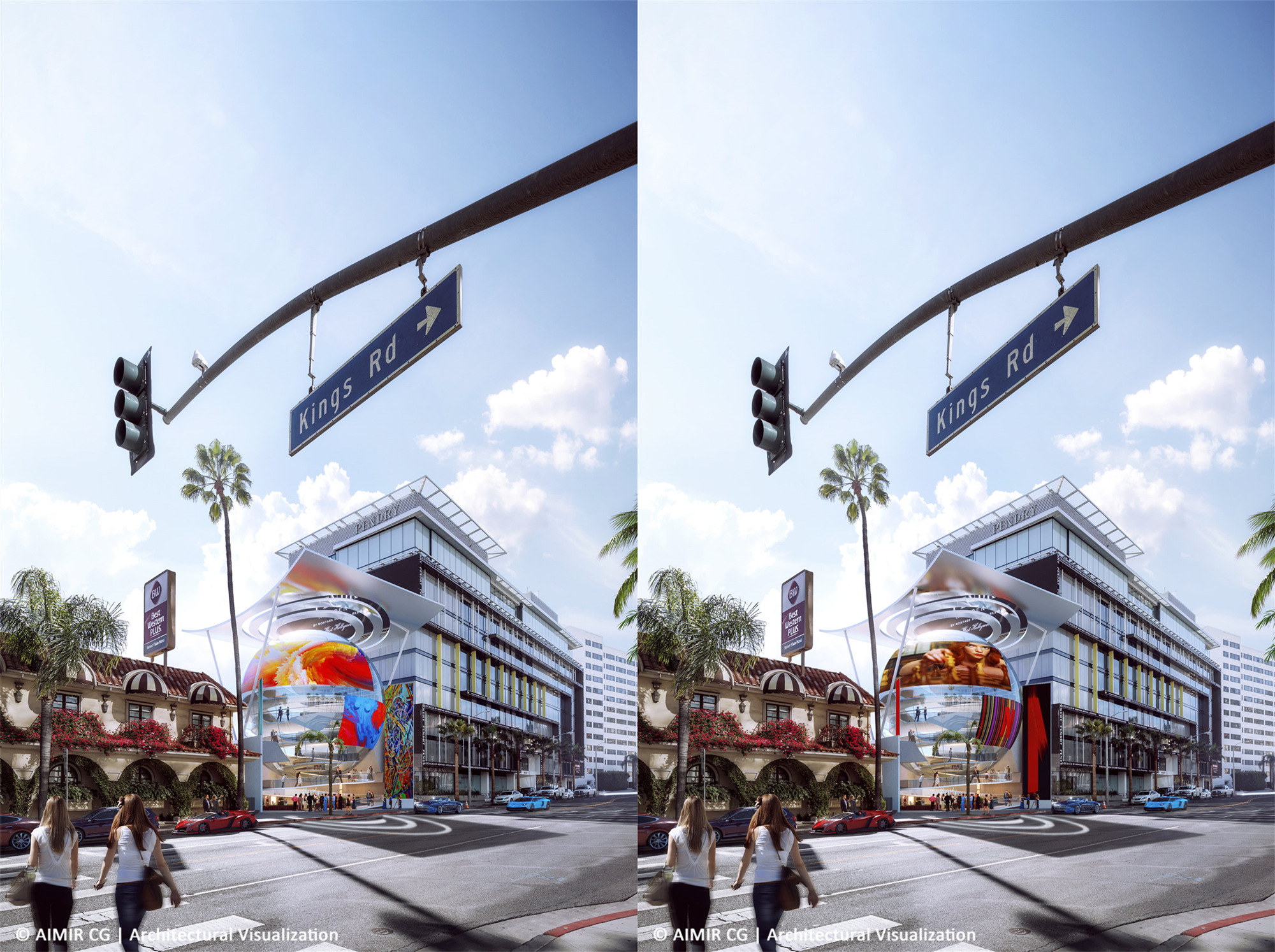 We changed the pictures of the two large LED signs on the sphere and two vertical signs on each side of the sphere.

A couple of days after the final delivery, Michele sent us a new model, saying the design needed to be revised in order to dealing with Los Angeles City Council’s requirements. Thus, a new round of 3D renderings was needed in a short time period.

This time, the signature indoor ramp is replaced by three levels and a glass elevator in the center. The garden on ground level is canceled. Instead, a glass floor will be under the sphere with a fountain in the middle. What’s more, a small moving spherical element on the east side of the sphere will show the date, time and weather. 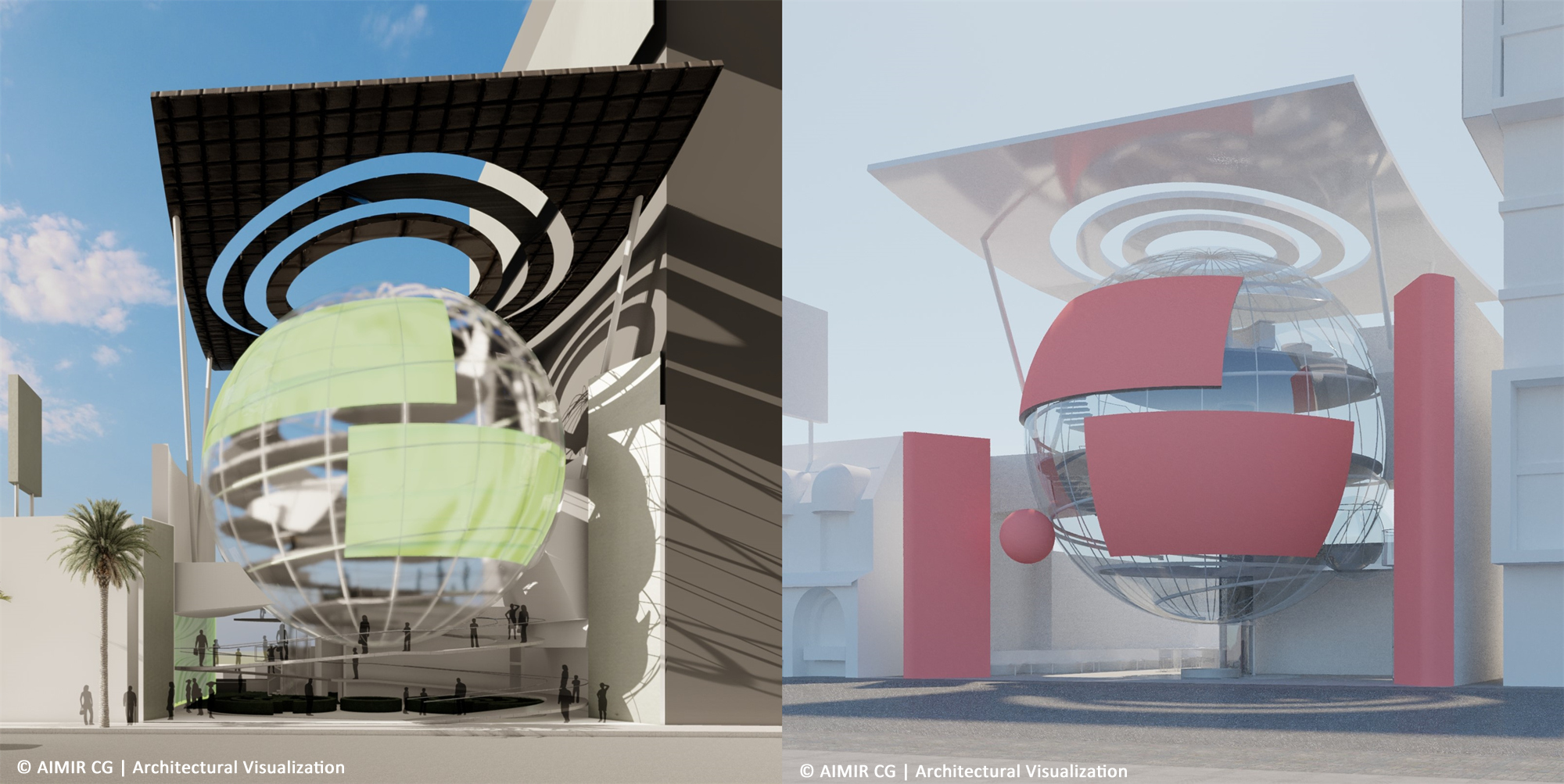 Because Michele mentioned time was critical, our 3D artists checked the model and started production straight away. 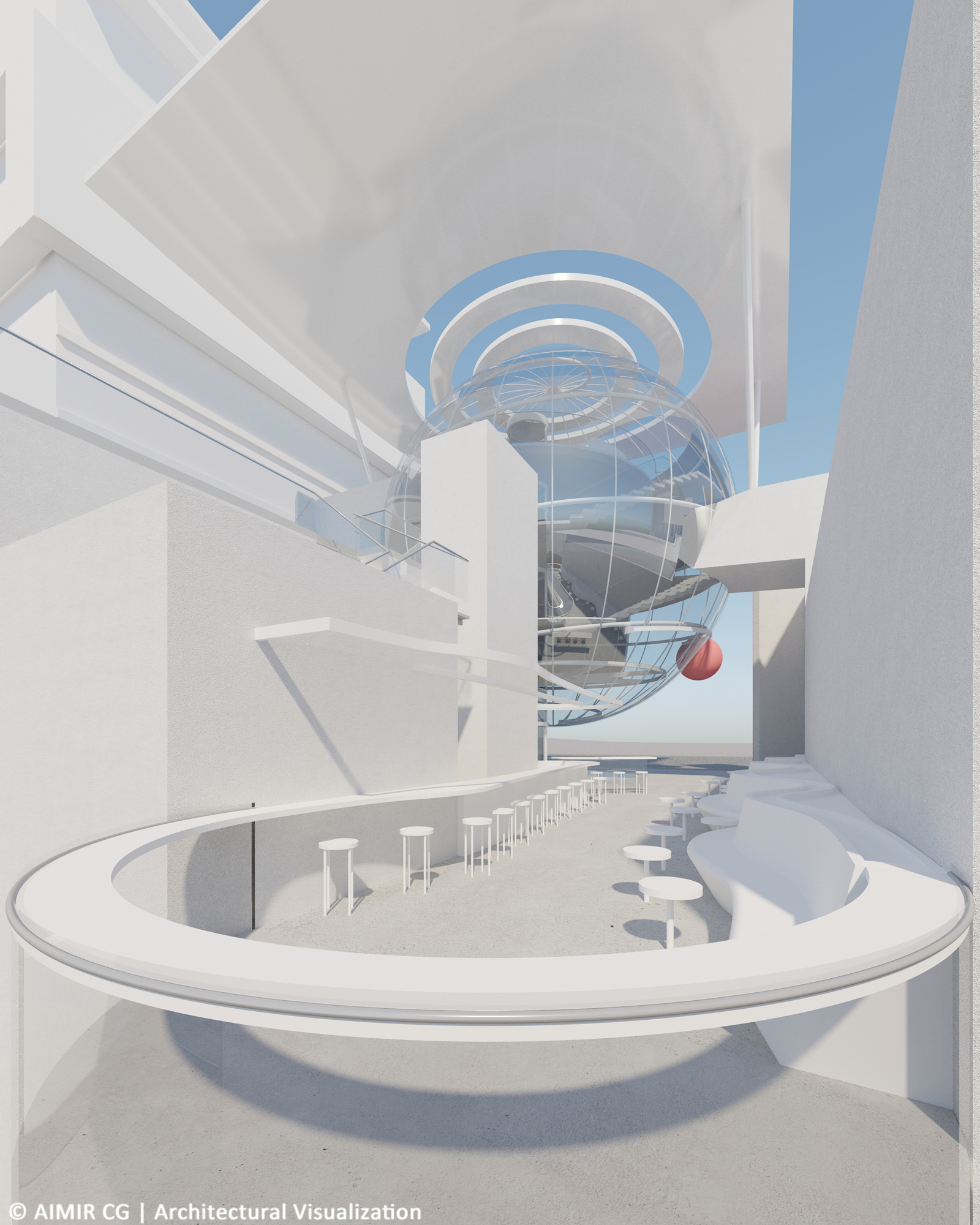 A bar is added. This is a view from the back of the sphere.

In terms of extra charge for design change, AIMIR has a complete and strict system confronting this kind of situation. Please refer to blogs: 3 Types of Changing Color in Architectural Visualization, and Four Typical Scenarios Concerning Extra Charge during the Rendering Process.

In total, AIMIR has created 10 images (former design*2 + new design*8) for the Sphere on Sunset Project using Corona Renderer. We’ve shared AIMIR’s story with Corona Renderer before, and it is still one of the best rendering software AIMIR’s been using to provide our clients the most realistic experience. Below, you can see the night view of the sphere: 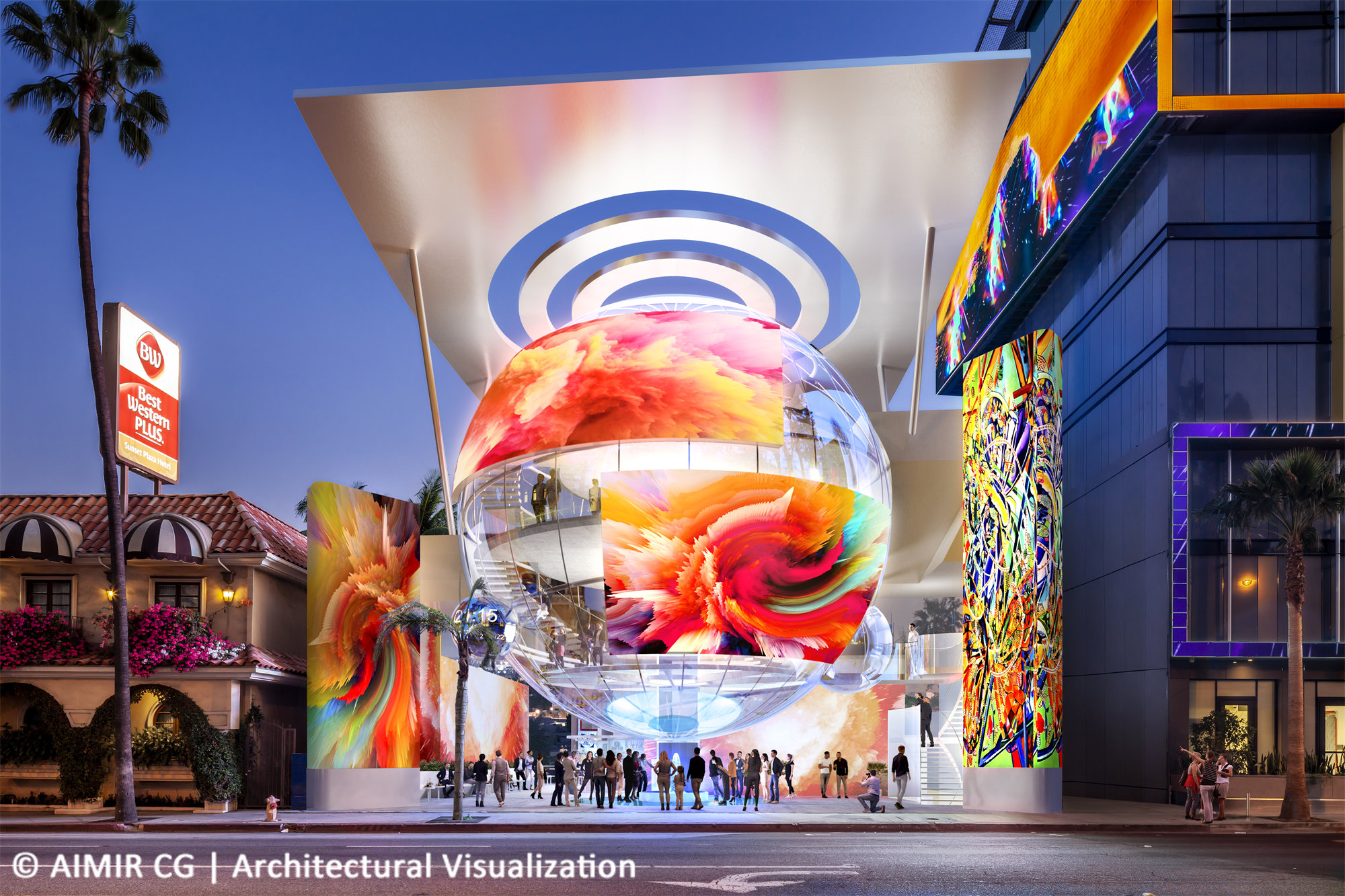 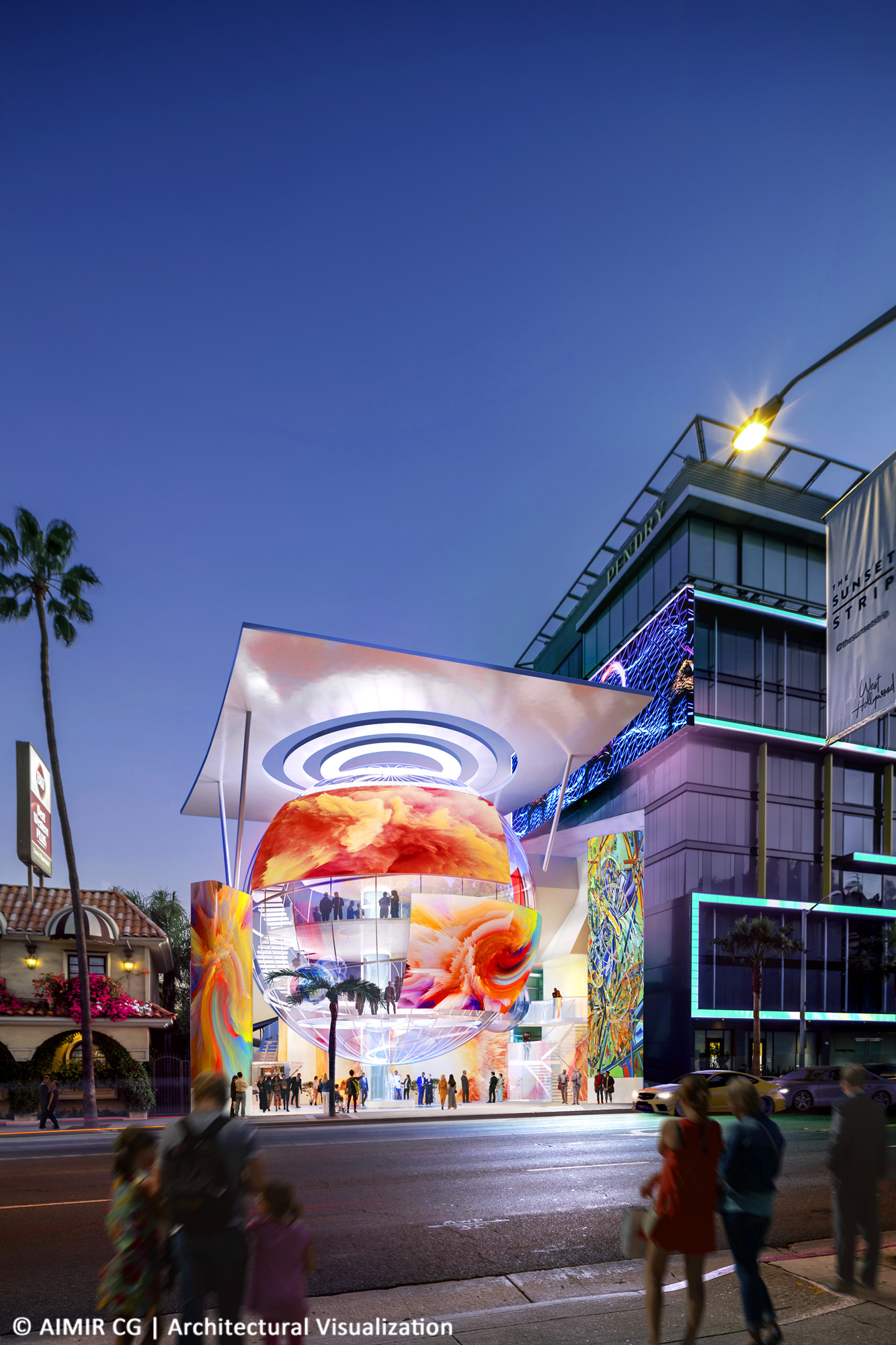 And below are four view angles of the sphere under daytime mood: 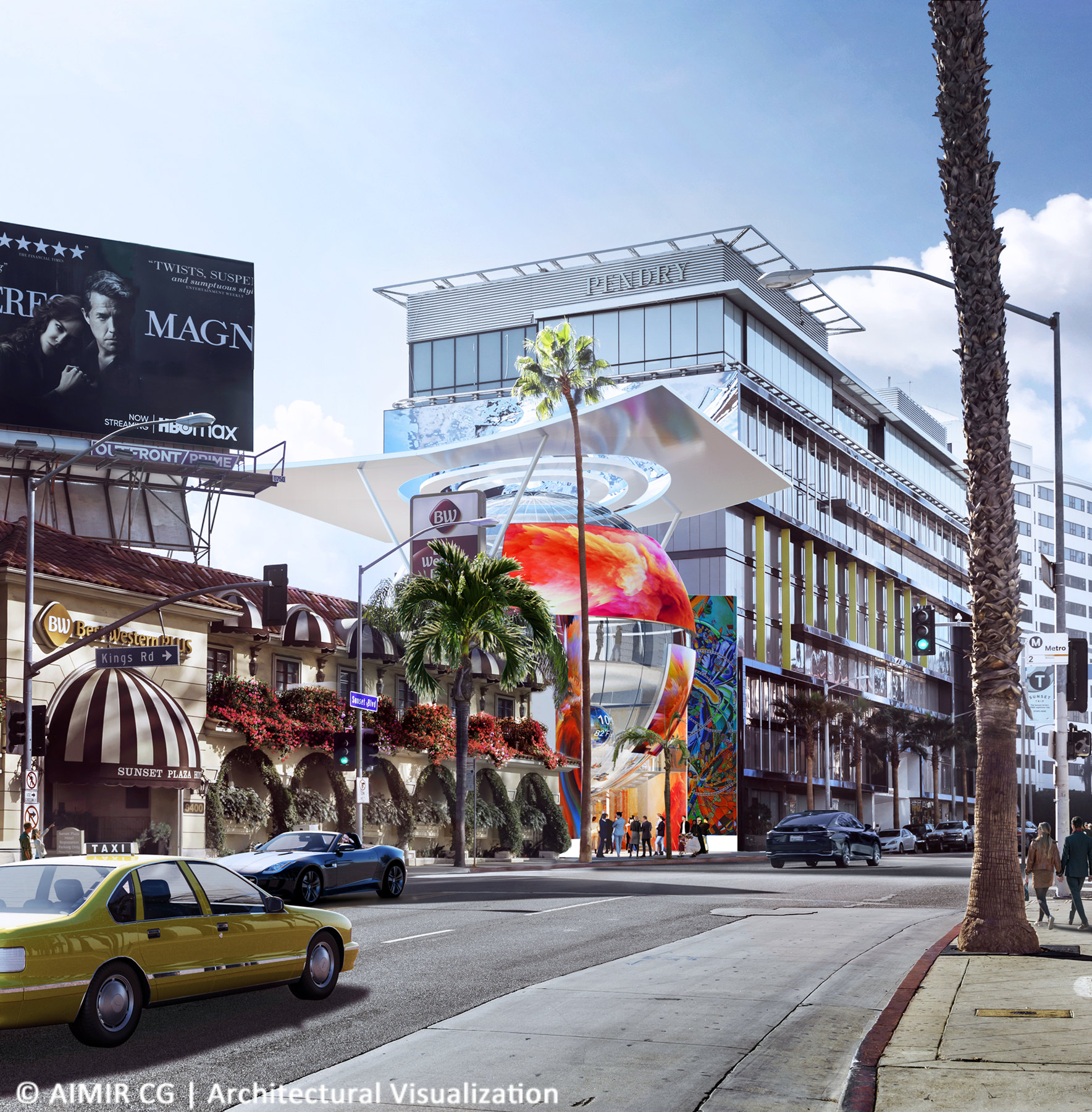 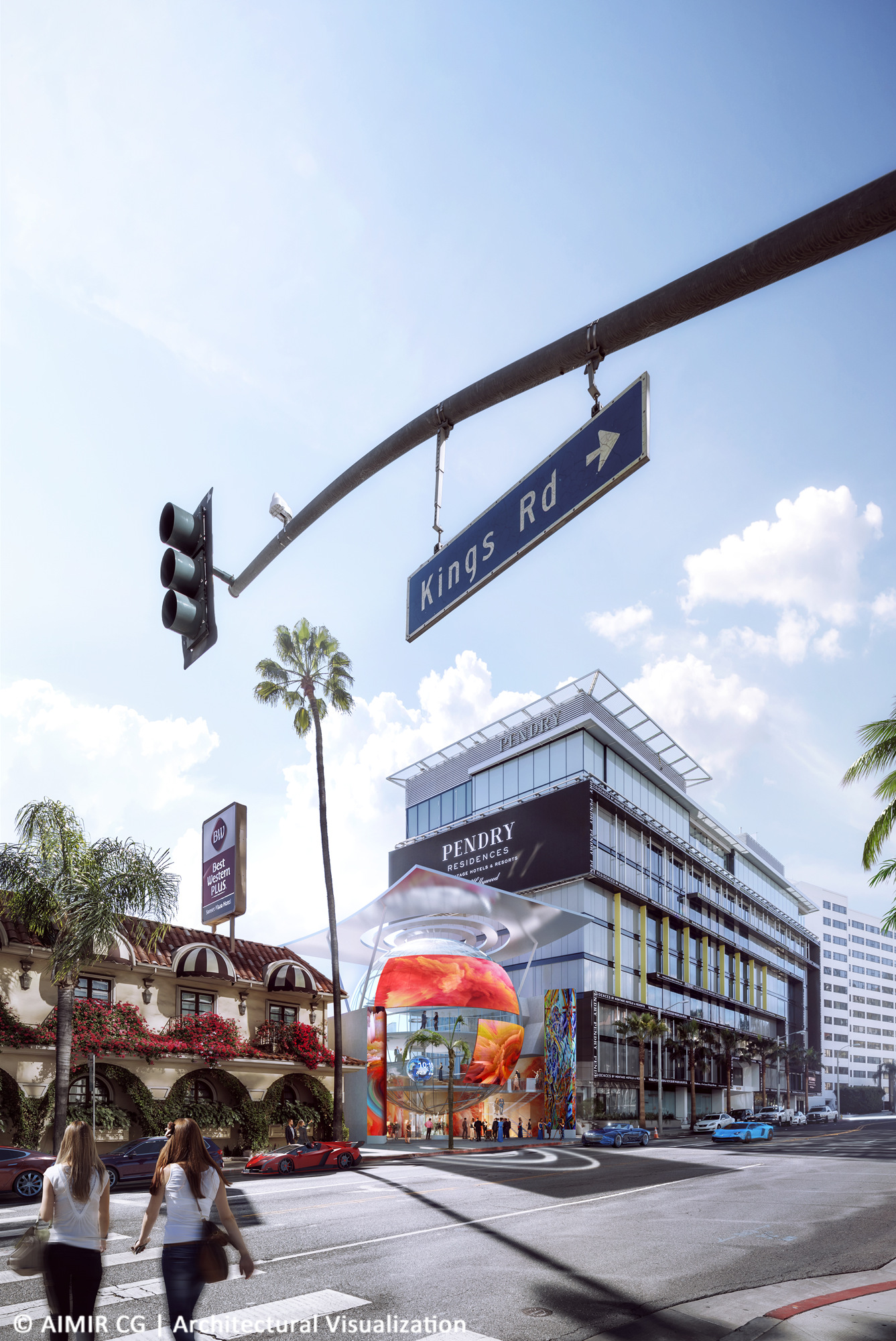 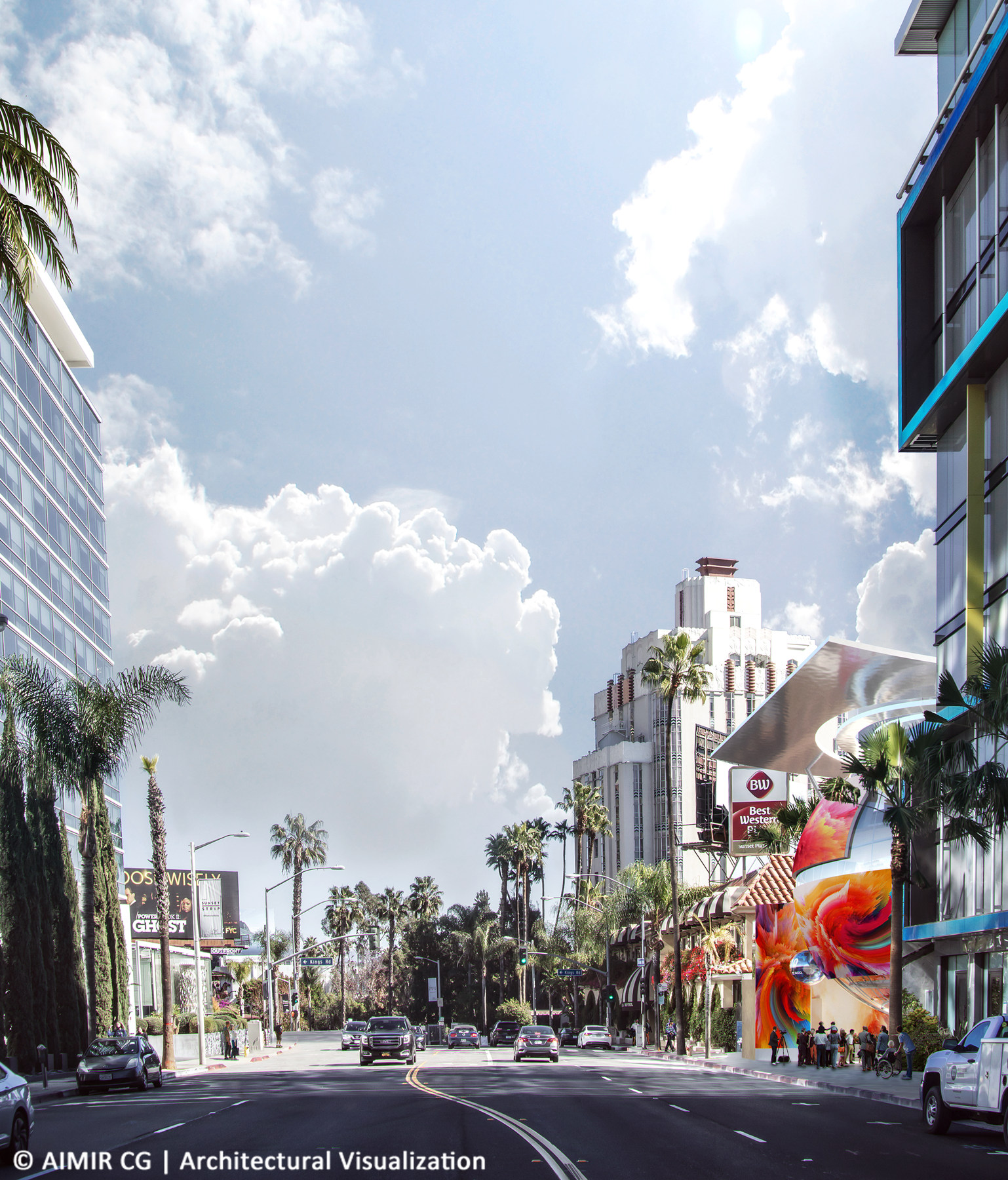 This view below unveils the gorgeous bar at the back of the sphere: 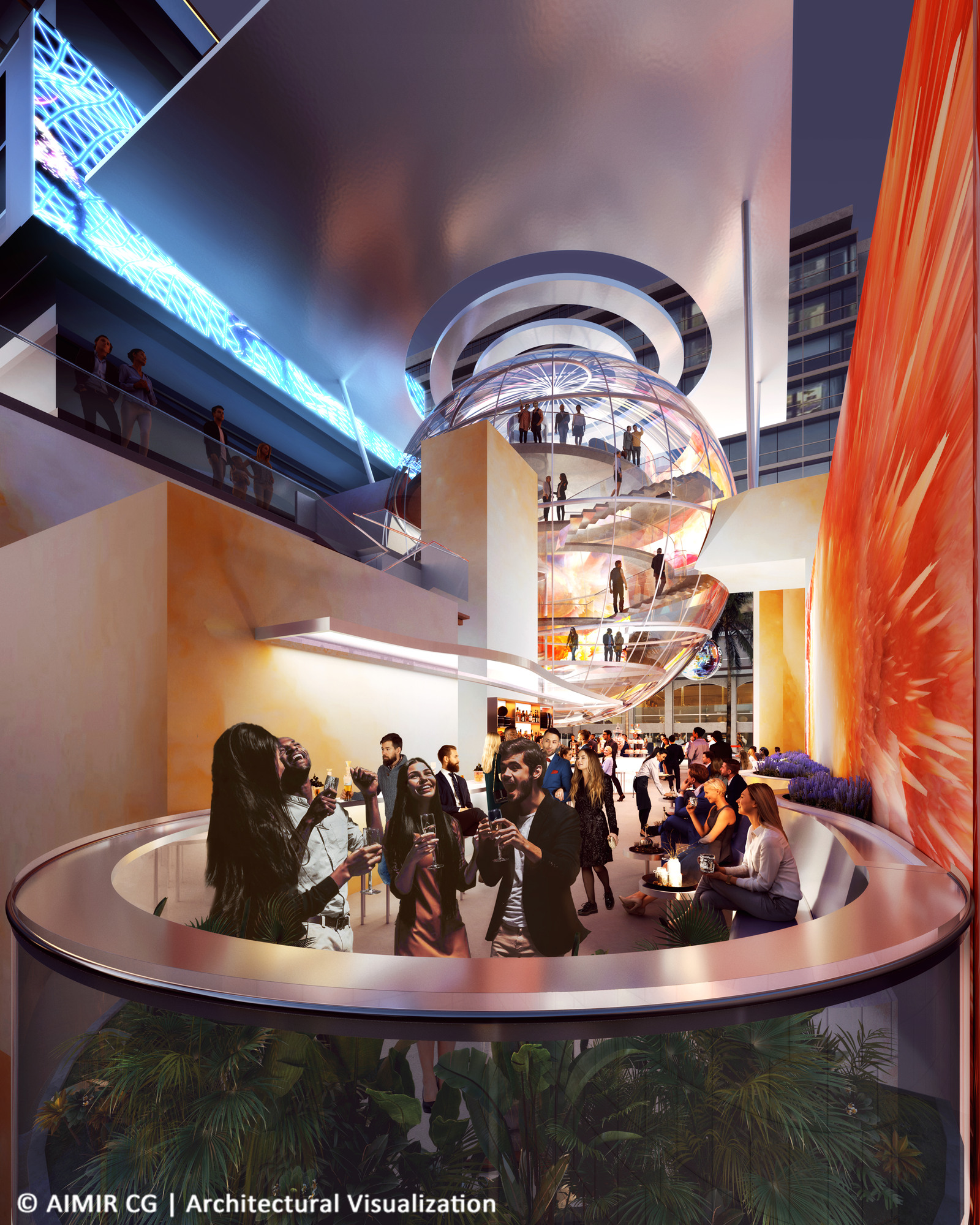 And these two images are comparison of former (left) and new (right) design of the interior view:

At last, two former design views in the day: 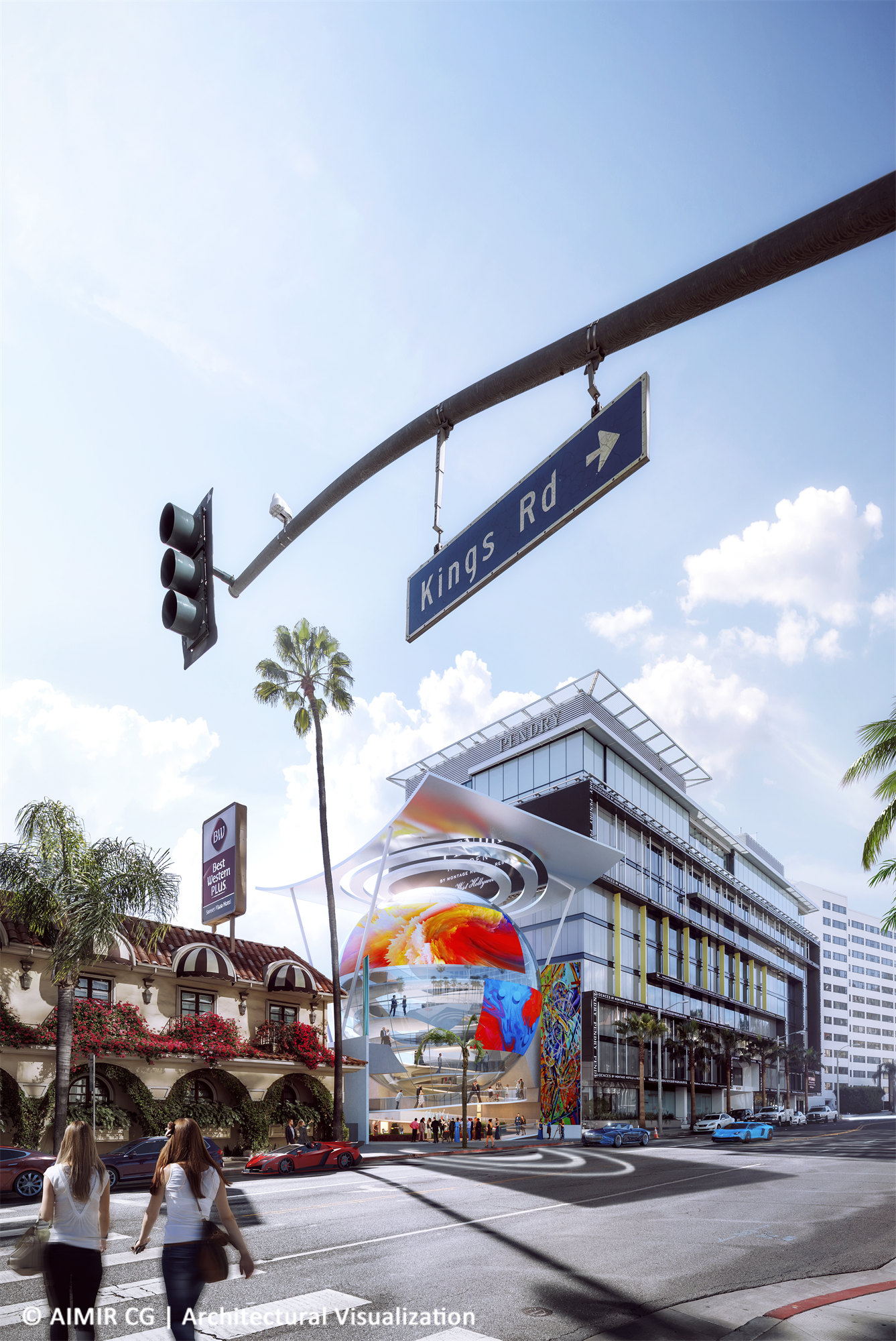 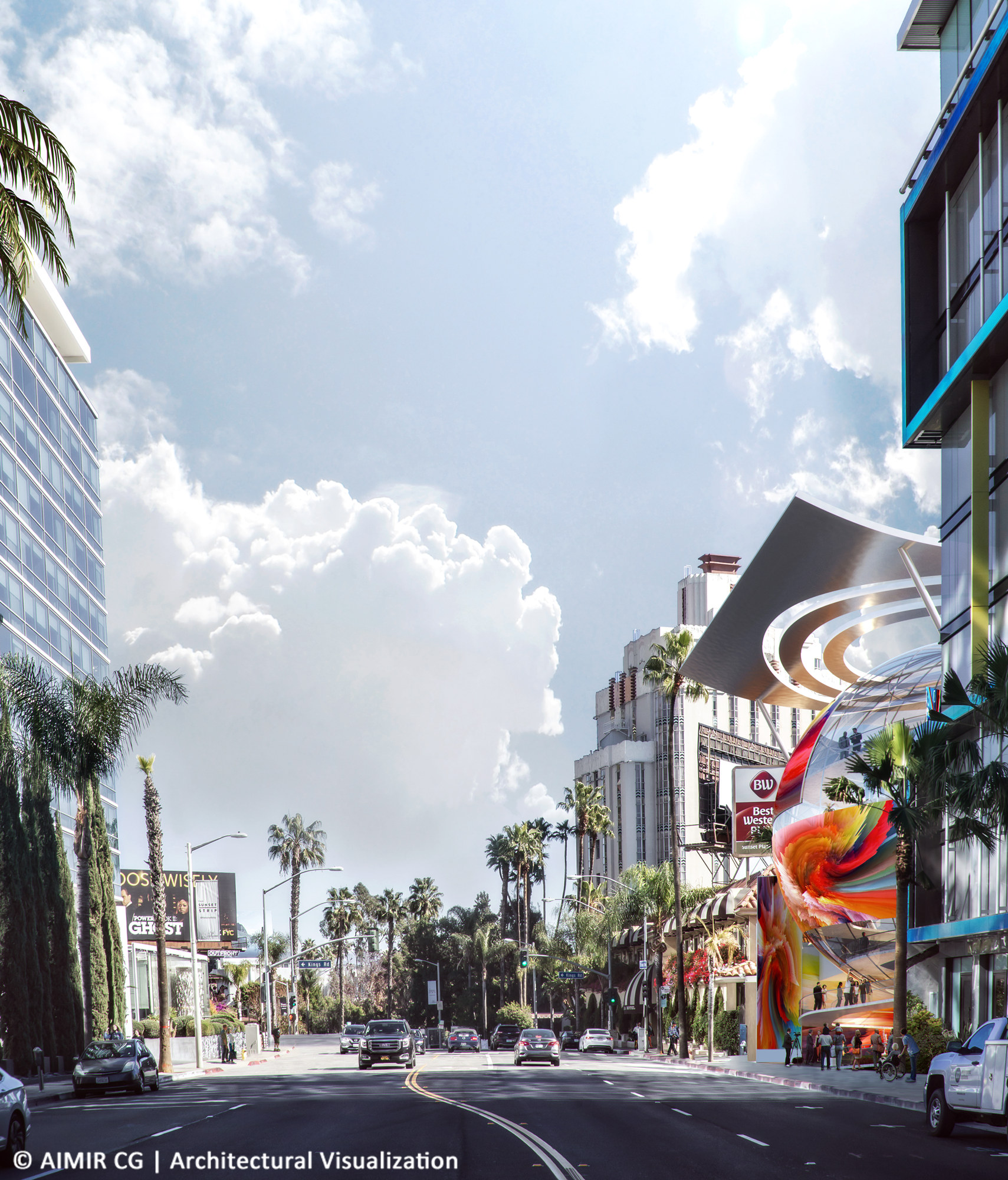 These CG visuals helped Michele to showcase this futuristic design full of technology and innovation. It would not be just another place to have one of the best views of Los Angeles city. With 3D rendering, the architect could prove that this place would be the new landmark of Los Angeles.

We are so honored to have been a part of this beautiful project. Now, we hope to pay a visit to Sphere one day when it’s built, and enjoy it from the view in the 3D works we’ve created for it. After a couple of months, Michele brought up another fabulous project in Costa Rica, which we’ll soon talk about in future blogs.

Need to bring your projects to life before your clients’ and audience’s eyes? Contact AIMIR for 3D visualization services. We’ll get back to you in 24 hours with the best CG solutions for your project!