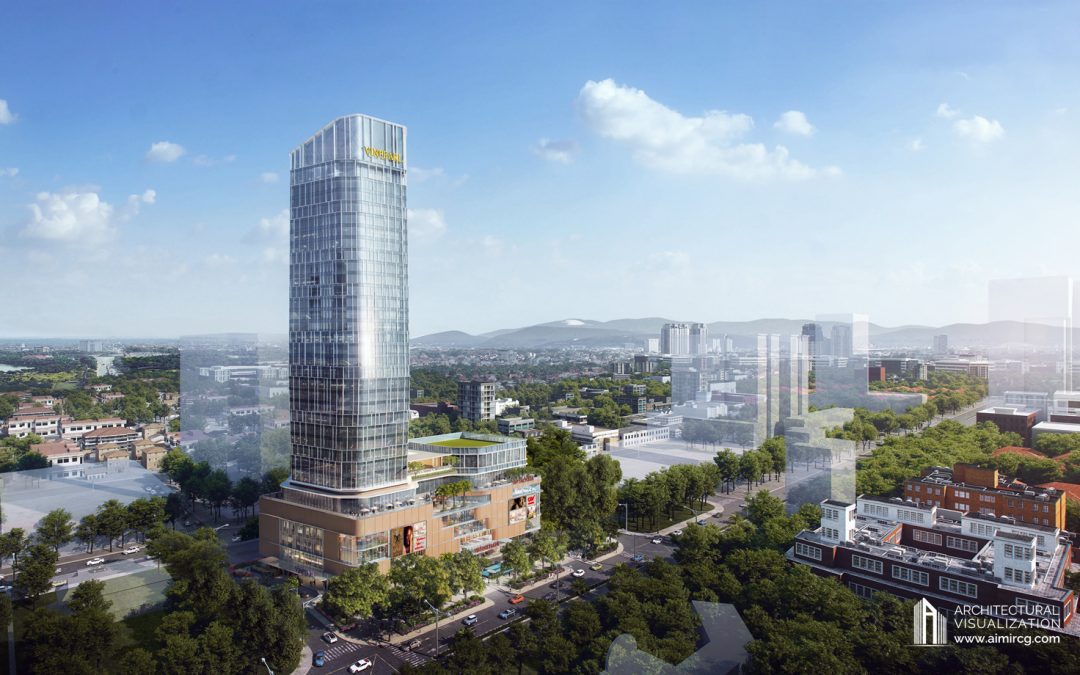 Located in Vietnam, Vincom Plaza is the largest shopping mall in local community which combines shopping, dining, and other amusement spaces. Now it’s welcoming a brand new proposal and the architect Prasasti from SCSY was looking for a series of 3D images for better presenting this project.

For commercial projects especially high-rises, 3D rendering is the best tool to showcase the vision. In particular, the aerial view is able to give the viewers a clear and crisp view of large areas where the structure is located.

This time, we have delivered this project with photomontage. And in the blog, we hope to show you the entire working process of 3D rendering project which uses photomontage for surrounding context. Let’s start!

Prasasti requested five camera angles for Vincom Plaza, which were: 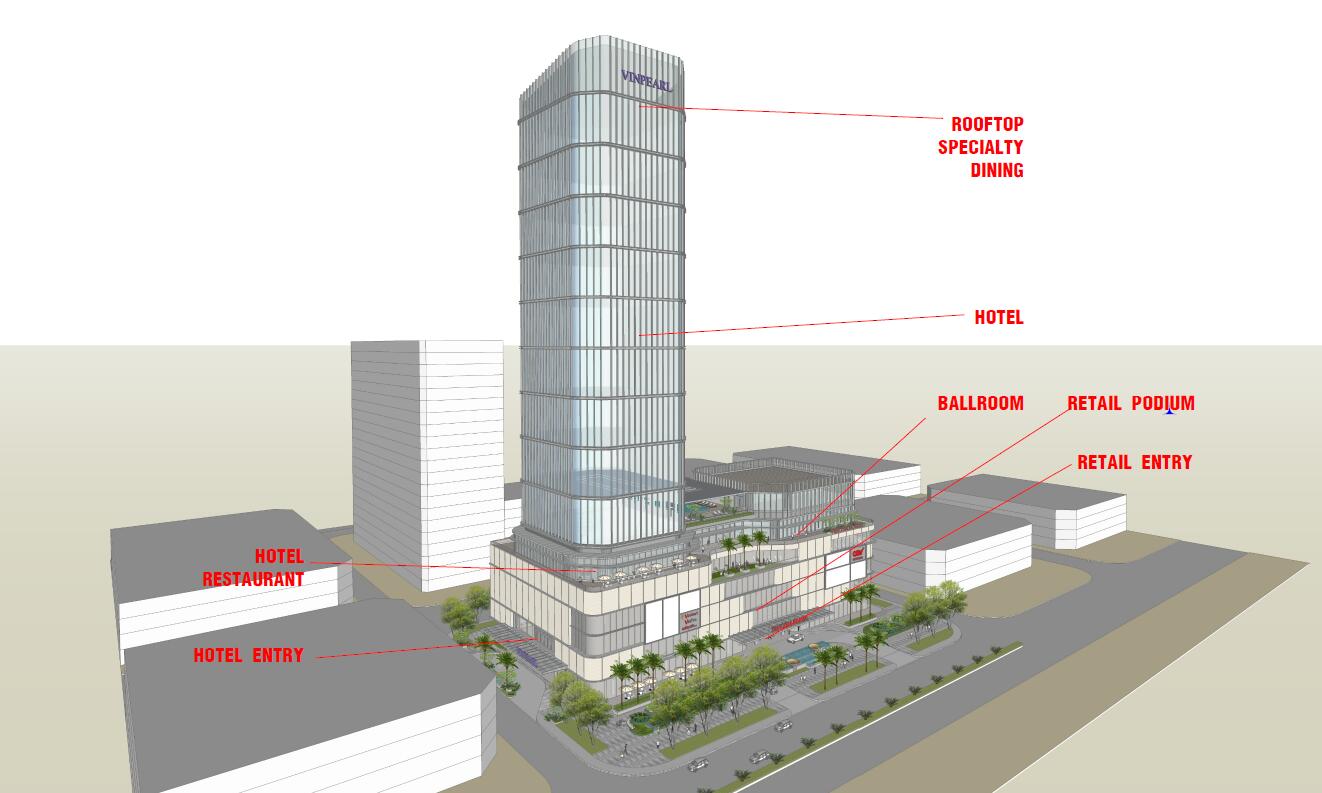 A scene markup with different function areas of the structure. 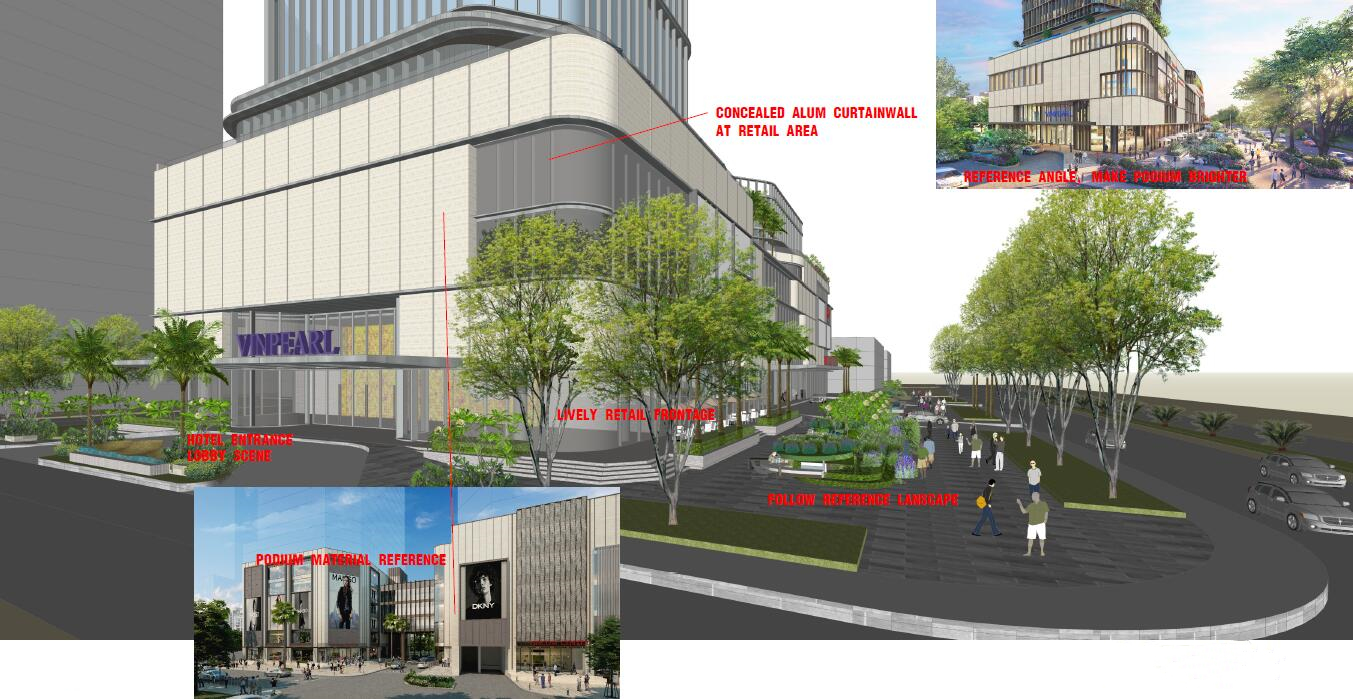 Part of the material board for the structure.

They’ve also requested to keep all context buildings as transparent blocks which reflected massing height and general roof forms. This was because these areas were under future development so it was good to keep them. But transparent masses will dilute the environment, making the main building conspicuous. 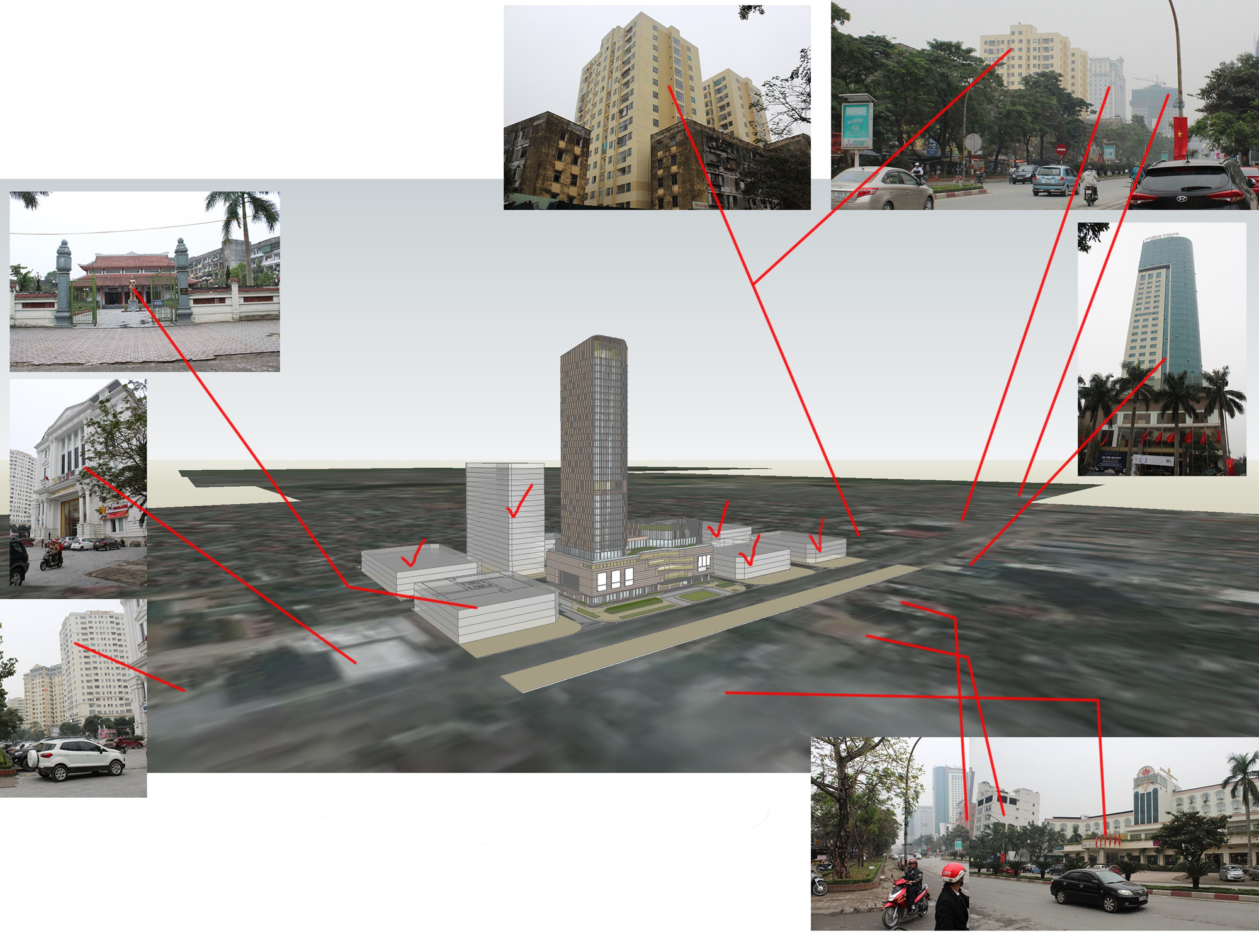 Actually, there are four methods dealing with the surrounding context in 3D visualization, and you can read this article for more information: here.

As the files were complete, we started with inputting the SketchUp model into 3ds Max and fine-tuning the details. 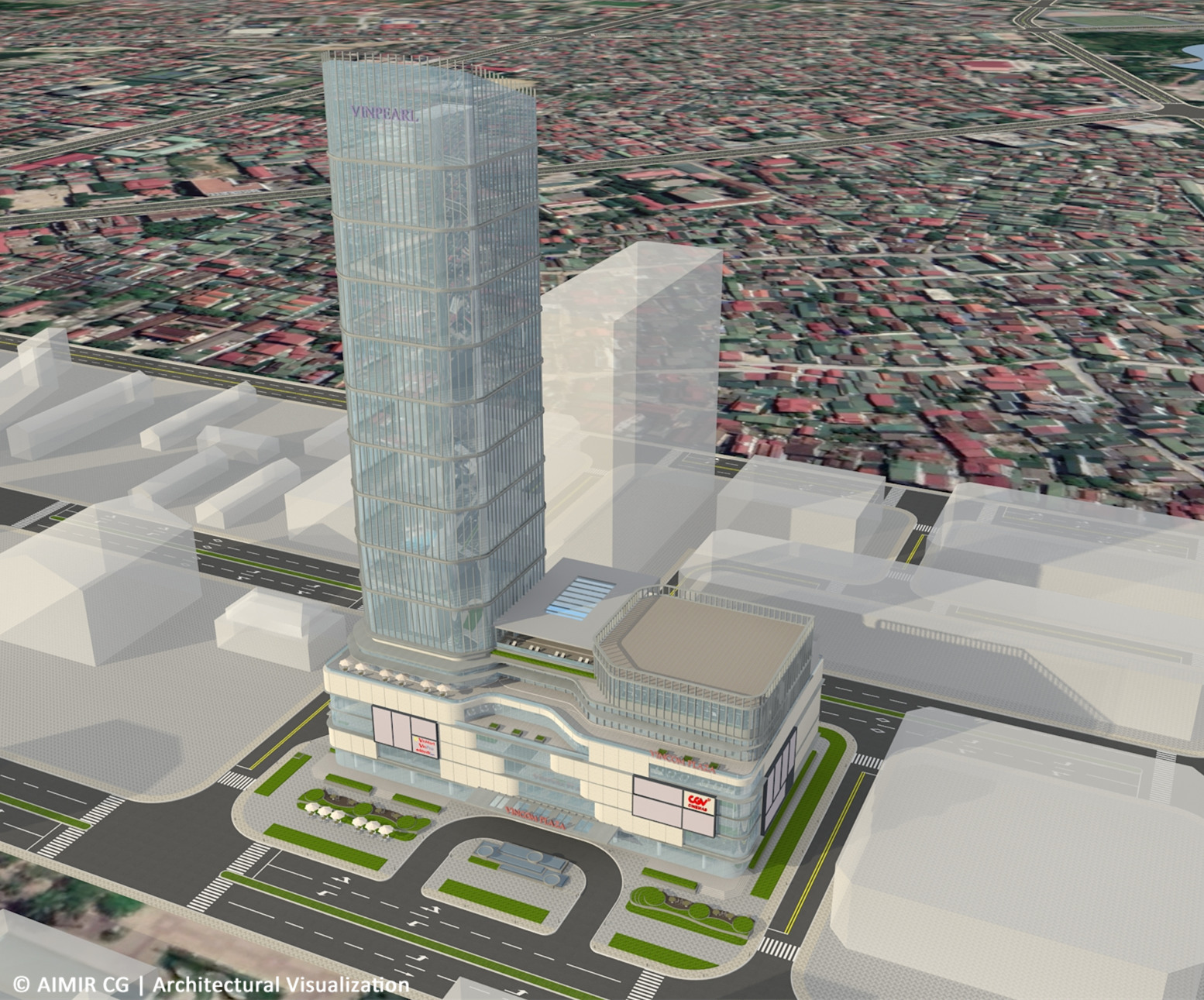 After Prasasti confirmed the model back, our 3D artists carefully add materials and textures and set the lighting. We did this based on the material plans and mood reference images. At last, we put the whole model directly into the photos. Of course, we adjusted the model to make sure it was at the accurate place comparing to the surroundings.

Just after a couple of rounds of adjustment, the final images were delivered in 4K as below:

Half a month after the final delivery, Prasasti’s team came up with an updated plan for this mixed-use. In the new plan, the tower has a bulged design and the façade is different as well. 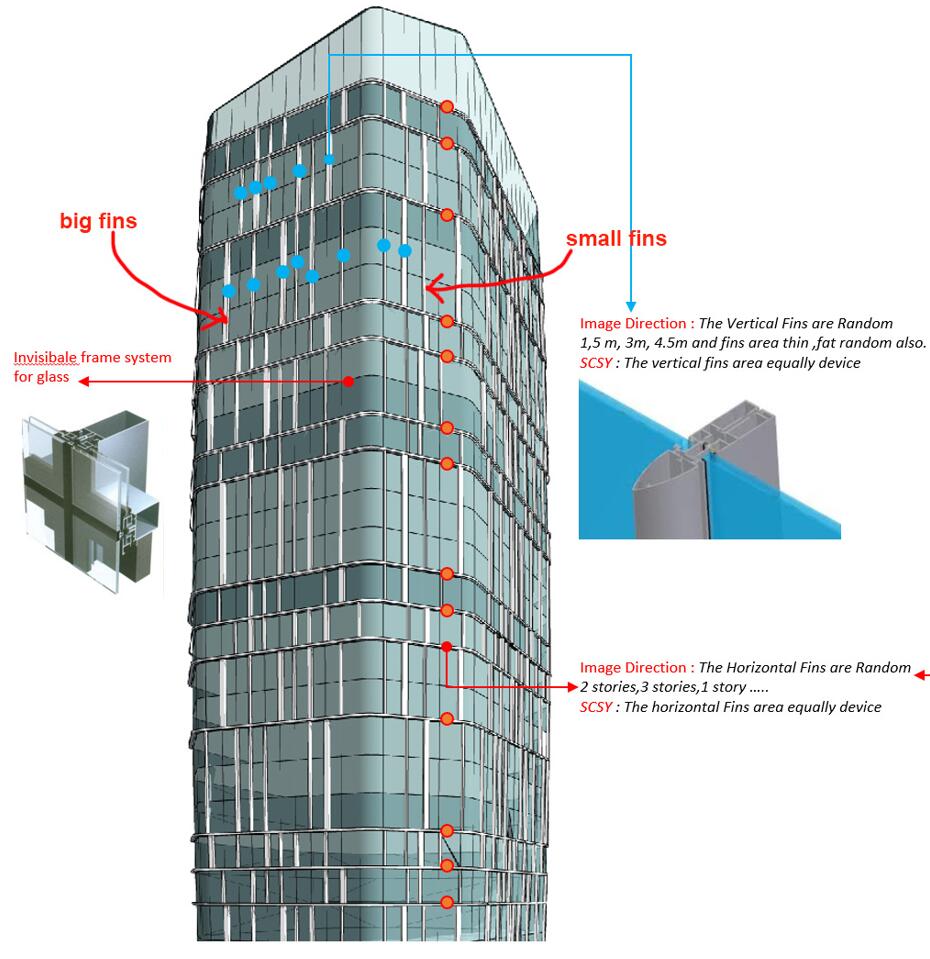 Markups of the new plan.

We quickly studied the new information and built the 3D model. After we shared it with Prasasti’s team, they came back with some comments about adjusting the design, which were: 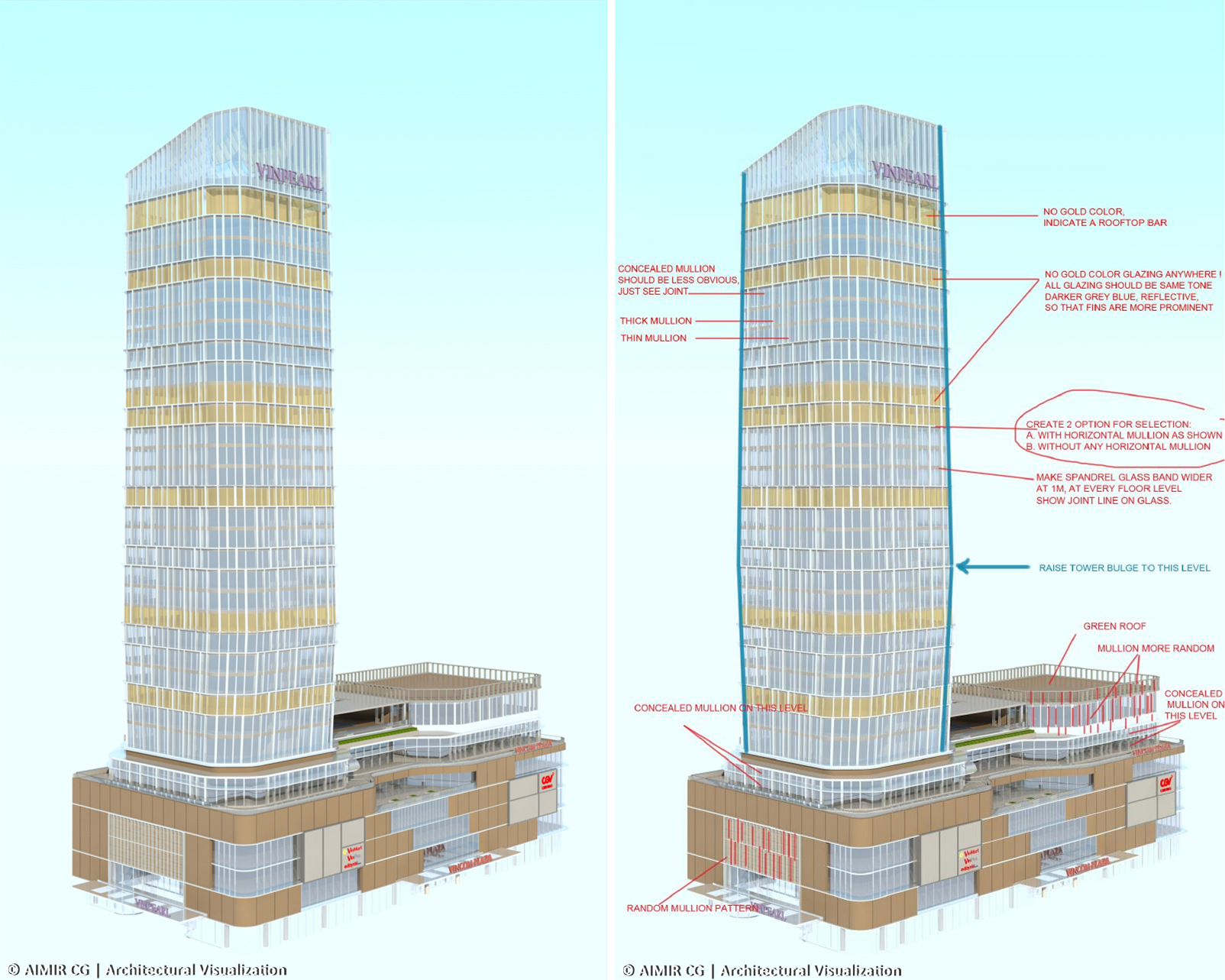 This time, there was no added views. All we needed to do was to simply replace the old building in two previously-done views with the new structure. To guarantee the best result, we double-checked the revised model with Prasasti’s team together until it was their ideal result.

At last, the new plan was presented in the following two views:

We are excited and proud to give visual forms to this mixed-use project. Prasasti’s team is talented and very easy to work with. Using photomontage for surrounding context is a smart choice especially in aerial views, because a clear photo is a powerful tool to present the structure. After this project, we’ve worked with SCSY for other projects. Hope to share the stories soon.

Thinking about using photomontage for your architectural project? Or not sure how to deal with your project? Talk to our professional 3D architectural visualization studio, our 24/7 standby team will get back to you with the best proposal and result!